Noobie here: Help me replace POR15 in my arsenal

Hello everyone, complete noobie here! I have previously used POR15 many times, and for a long time I thought it was the bees knees. I'm not a pro in paint or body work, just an amateur who wants to make his cars last forever, and is willing to put in the work to make it happen. I thought that if I followed all the POR15 directions down to a T, I would be rewarded with awesome long term protection against rust. But I saw and heard things over time that made me question what POR15 could actually do, and now I'm at a point where I kind of lost and need some help. POR15 was my go-to product for all things rust related, and now that it appears that my faith has been misplaced, I'm not sure what to replace it with.

I'm in the middle of doing a mini-restoration of my 1996 Infiniti I30 that I've owned since 2003. I cut out all of the rusted metal and taught myself how to MIG weld to patch it back up. I scuffed up the new metal and wiped it down thoroughly with PrepAll, and then sprayed it with some 2K Epoxy primer I got from my local paint shop. I then sprayed some high build primer on top of that to smooth things out, and that's where I currently stand. 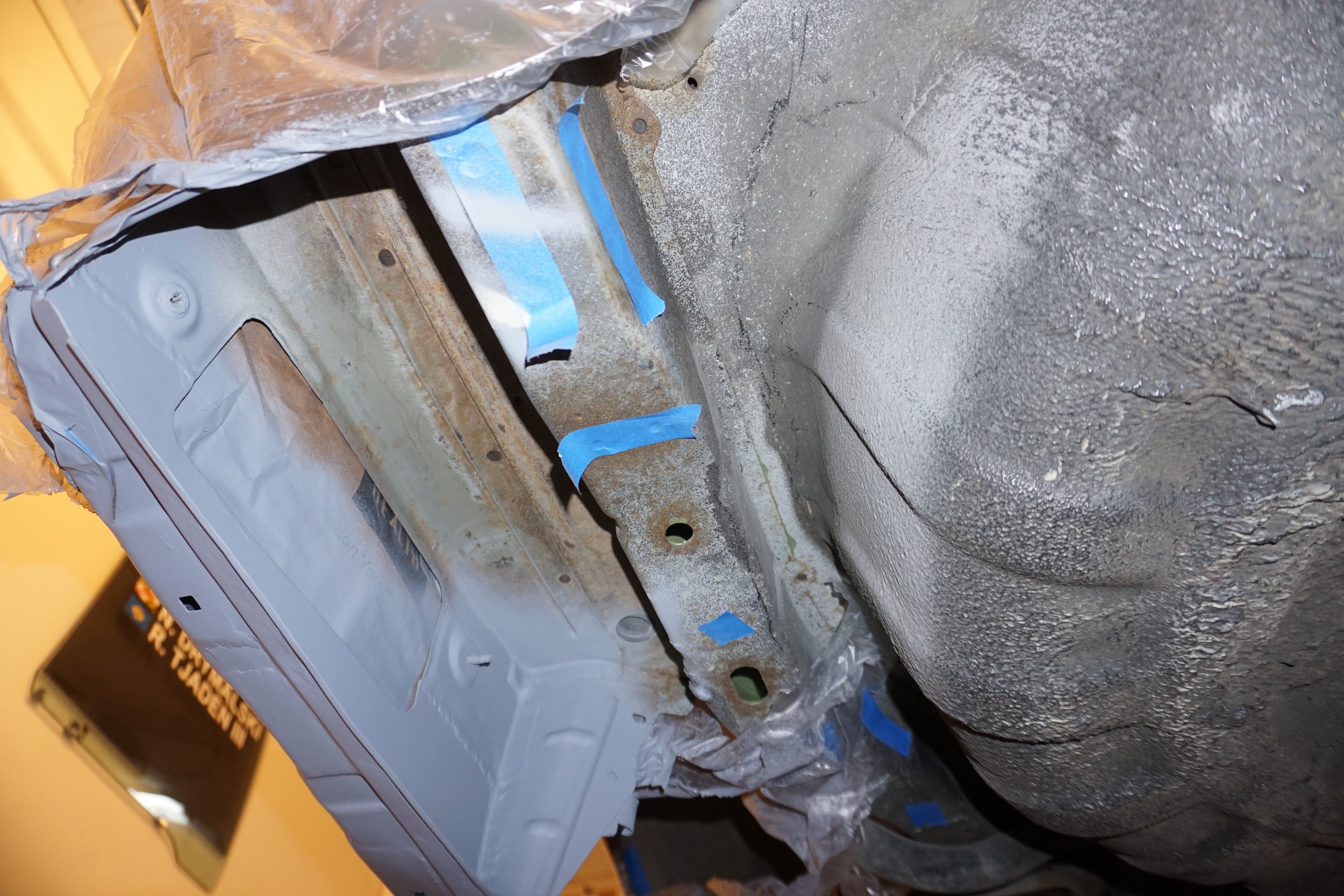 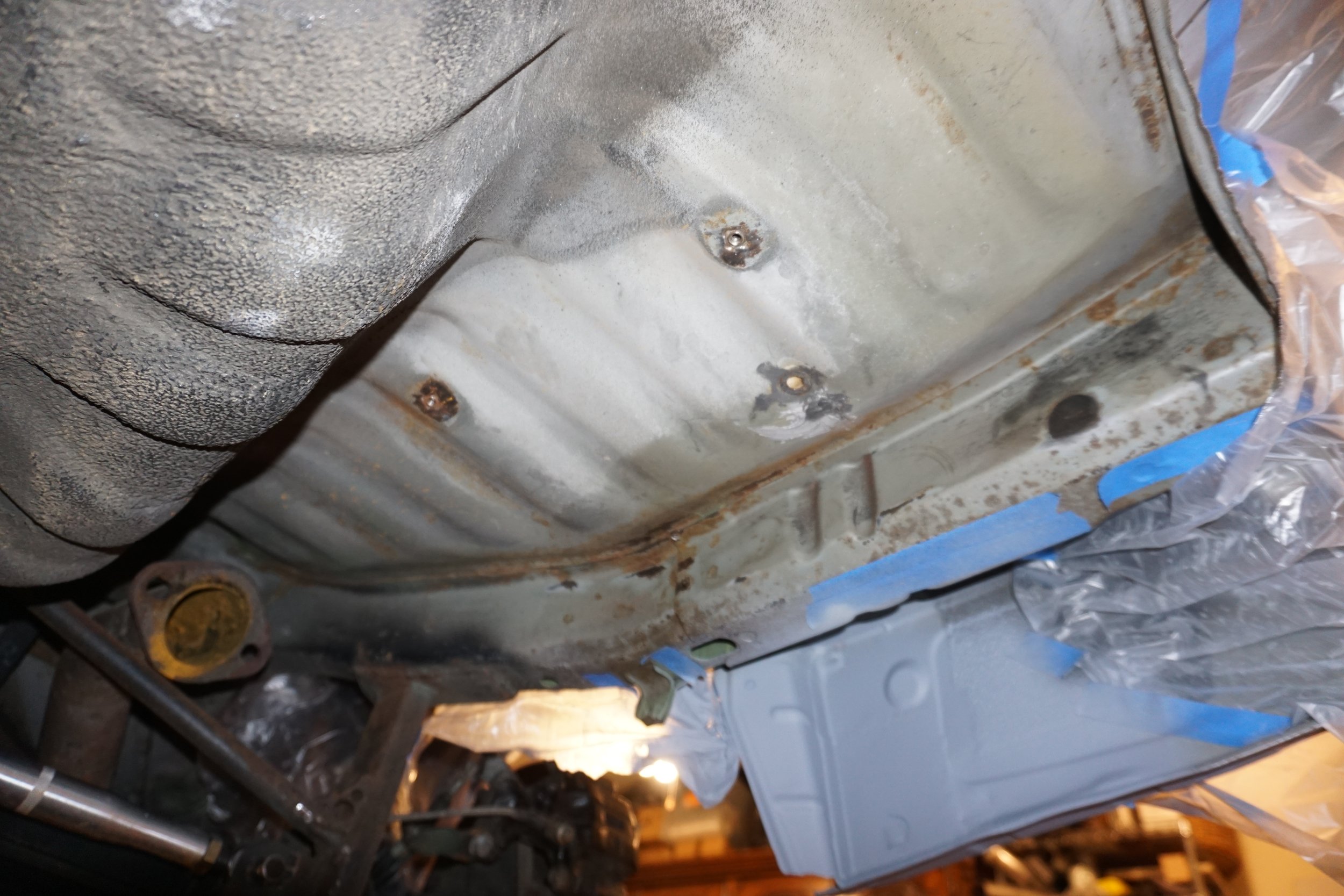 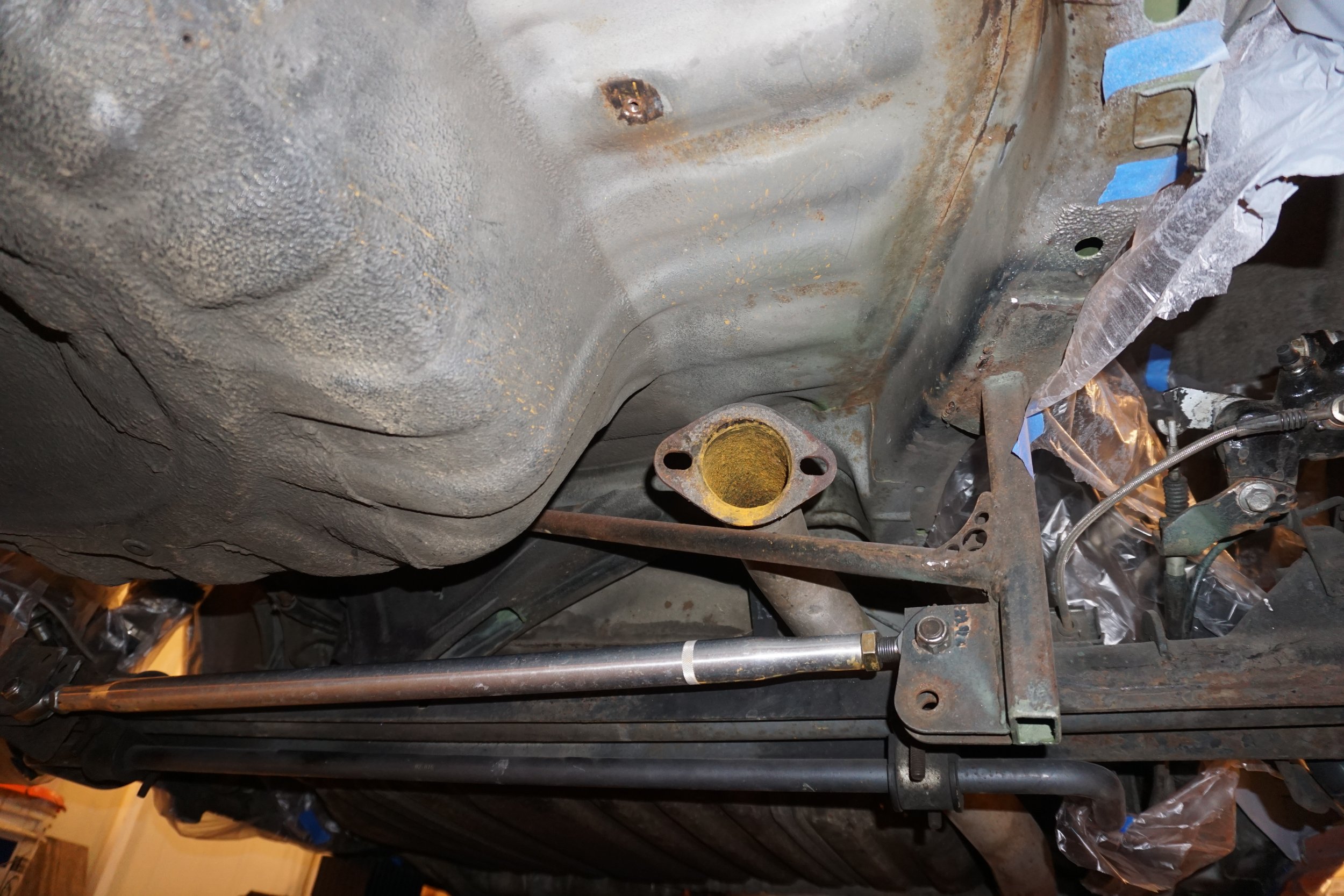 I know I need to get some paint on top of the primer, but I don't know how to approach all the surrounding metal. There is surface rust here and there, but nothing some sandpaper won't clean up. These are the areas where I was planning on using POR15, but it sounds like that's not a great idea. I guess my question to you is how should I approach those areas? Is the answer always "take it down to bare metal and then epoxy primer"? I feel like removing what's left of the factory coating is counter productive, since it's still in good shape in a lot of areas. How should I approach these mixed areas where I have fresh metal, old metal with good factory coating, and old metal with some light surface rust? I can't imagine spraying epoxy primer on top of light surface rust is a proper long-term solution.

I can't give the car an acid bath. I do have a 5 gallon bucket of Evapo-Rust, and was considering building some janky sprinkler system to continually spray the underside of the car with it until the rust dissolves. I also have some "Krud Kutter The Must For Rust" that seems to work faster than Evapo-Rust.

Additionally, I repaired the "side pockets" on either side of my trunk by cutting out rusted metal and welding in patches. 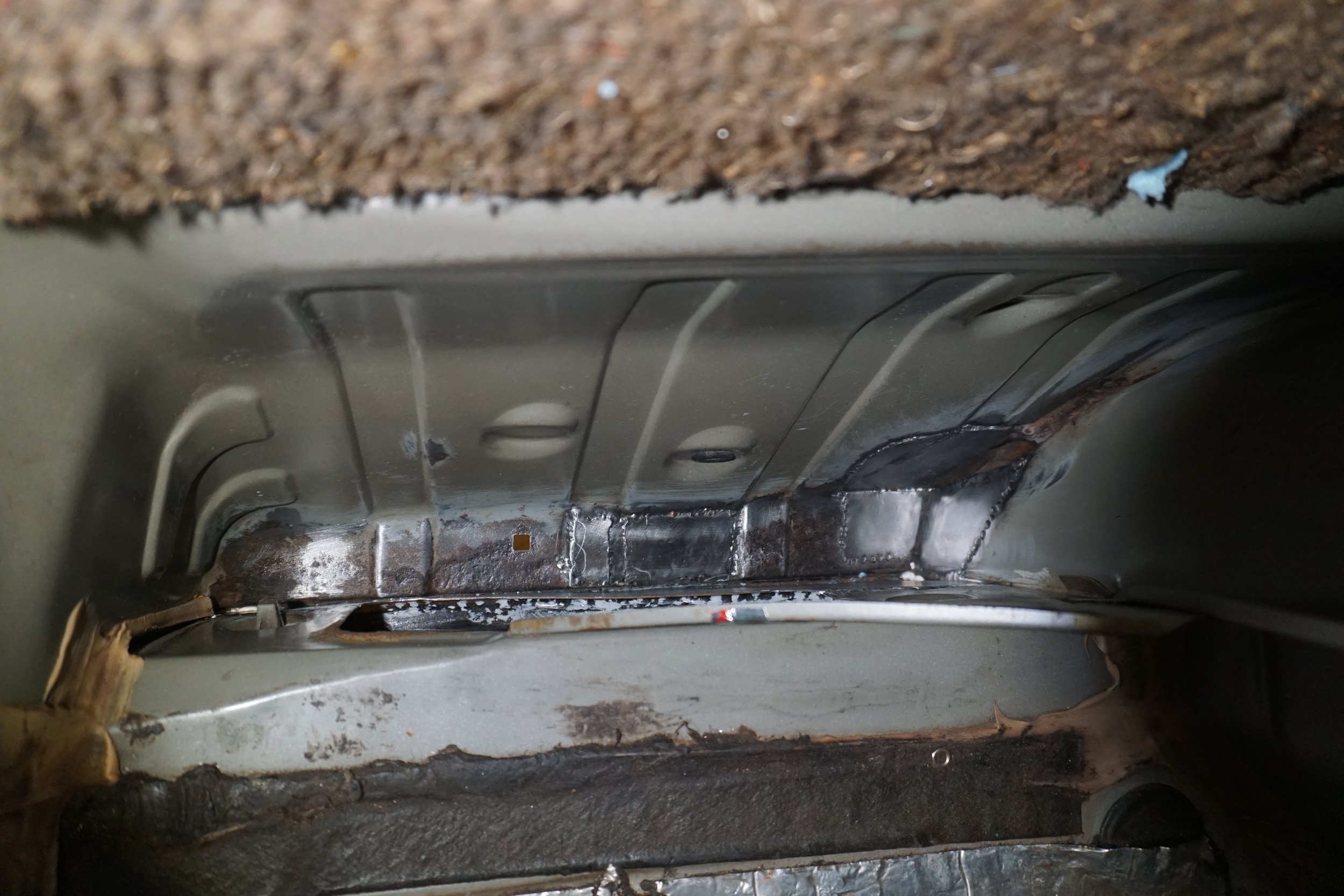 But unfortunately I've already applied POR15 in there. 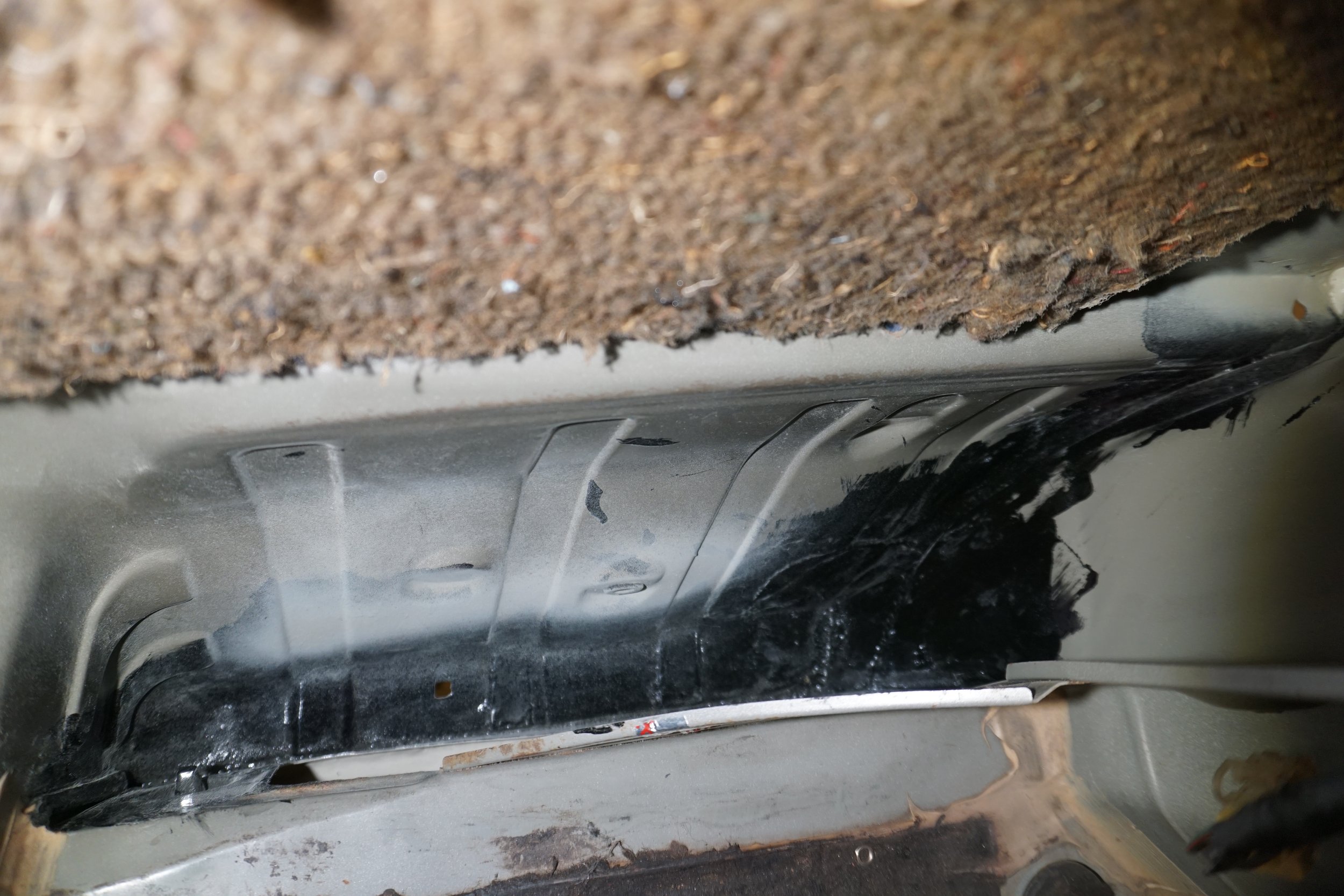 As I understand it, the main complaint with POR15 is that it's so strong it cracks instead of flexes, so tiny cracks appear that allow moisture to get under the POR15 and go crazy while being undetectable. Is this generally accurate? Short of completely taking these side pockets back down to bare metal and spraying them with epoxy primer, would coating them with something like Fluid Film mitigate damage from cracks? Access is very tight in these pockets, and POR15 is very hard, so I'm not sure getting it down to bare metal is a realistic possibility.

Thank you for reading!

Take a moment and put POR15 in search for the forum, then take some good time to read all the responses. Then you might answer your own question

I agree. You should strip all of that to bare metal. Putting anything over Preps All or other rust converters is a recipe for paint failure. (I learned this the hard way.)

Media blast everything to get to bare metal. Then shoot 2 coats of SPI Epoxy. When cured you have the option to shoot a bed liner product over it and the underside of your car will look great and last longer than you will.

I shot a horse trailer undercarriage with SPI epoxy. After a couple of weeks I deliberately tried to scratch the surface with a flat blade screw driver. I couldn't believe how tough this epoxy is.

Thank you for your replies, I will spend more time searching.

Media blasting is something I'm unable to do myself in my home garage. I only have a 20 gallon/8.2 SCFM @ 40psi/6.5 SCFM @ 90 PSI air compressor, which I believe is marginal at best for blasting, and I only have a gravity fed blaster, which I understand won't work when spraying upside down. Please correct me if I'm mistaken. I would happily pay a shop to be able to access their professional level equipment and blast the whole thing myself, but I don't think most/any shops would allow such a thing. I simply can't afford to pay a shop to do this work, so I have to work around the limitations of my home garage and available tools.

So with that said, will thorough hand sanding be sufficient for the areas with surface rust, or will I need to use a chemical solution in addition to that to further eliminate rust before spraying it with SPI epoxy? Or am I just wasting my time?

And to clarify, I used Prep-All only on the fresh/clean metal I welded in so it was free of oils before I sprayed it with the epoxy primer I had available. Was this not the correct thing to do?

Use the SPI cleaner recommended in the datasheet. Follow it exactly as written.

You could use a spot blaster for the rusty areas.

This minimizes the mess 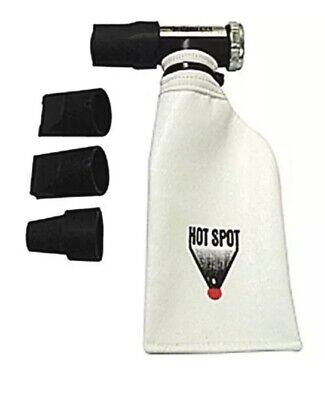 dhutton01 said:
Use the SPI cleaner recommended in the datasheet. Follow it exactly as written.

You could use a spot blaster for the rusty areas.

This minimizes the mess

Thanks for the tip, but it looks like my compressor is going to be the limiting factor again. With the corresponding Zendex Blaster, how long would you guess it would take to do one square foot?

How terrible of an idea would it be to rest this monster for $290/day? I'm guessing this would be wildly inappropriate?
https://www.sunbeltrentals.com/equipment/detail/851/0190050/2-cu-ft-soda-blaster/

Just spot blast the rusty spots. No need to strip the whole car imho. Do what you can with what you have.

Do you have a wire wheel to put in a drill? These work great for rust removal.


123pugsy said:
Do you have a wire wheel to put in a drill? These work great for rust removal.
Click to expand...

Is clear coat necessary under the vehicle for added protection?
T

Base only under the vehicle will not be chemically stable. Any leak would tend to remove it. Epoxy only or base/clear would be my suggestion.

Is clear coat necessary under the vehicle for added protection?
Click to expand...

These work great, to me much better then wire wheels or flapp disks[ for rust and paint removal]....they also have 2 and 3 inch versions for die grinders

Is clear coat necessary under the vehicle for added protection?
Click to expand...

Sorry but abrasives only remove rust on smooth steel. If rust is inside pits, the whole surface of surrounding metal would have to ground away to the depth of the pits before the abrasive touches the rust. This would leave metal really thin.

Tips for wire wheels: Use a fast drill. I keep a small hammer drill for this purpose. Change direction often as the wires lay down. The more worn the wheel, the better it works as shorter wires are stiffer.

If your metal is not pitted much, yeah, a flap wheel will work well.
Good luck with the removal.
E

If I were going to paint under a vehicle I would not use base clear but single stage paint. I think it would be more durable.

texasking said:
Base only under the vehicle will not be chemically stable. Any leak would tend to remove it. Epoxy only or base/clear would be my suggestion.
Click to expand...

Got it! I didn't realize I could just spray epoxy and nothing else, I thought it needed to be top coated. But that's not the look I'm going for, so it will get some paint on top regardless.

epb72: Thanks, I had forgotten about those things. I have one or two lying around. You recommend something as abrasive as the 36 grit? I'll need to figure out their max rpm to see if I can use them on my die grinders.

123pugsy: Understood, I guess that's where blasting comes in. Since at best I'll have access to a slow/weak sand blaster, maybe do the bulk of the paint/rust removal with wire wheels/flap wheels/3M bristle discs and then spot blast anything with pitting?

elwood: Interesting, that would certainly be less work than base/clear. Is there strong consensus that single stage is more durable, or would others argue base/clear is the better choice?
E

With s/s you can dust in the corners over couple coats with out having chances of too many runs. If you wanted a bedliner the same color as the vehicle, raptor sells a tintable liner. I've used it before , just leave out the binder in the color is what I was told. Course everyone has to do what is best for them.
You must log in or register to reply here.
Share:
Facebook Twitter Reddit Pinterest Tumblr WhatsApp Email Share Link
Top