Fuel tank is mounted and fuel system is all plumbed in. Exhaust is also done (at least until the bed is on). I'm on schedule to set the cab, doors, fenders, and grille this weekend!

Had a great day Saturday. We set the cab, doors, fenders, inner fenders, and grille. Then we installed the door weatherstripping, dash pad, some sound deadening on the back of the cab, front brake cable, wiper motor, and mocked up the seats. The factory sheet metal comes together quite well and while the body gaps aren't perfect, they were far from perfect from the factory. I was happy that the cab mounts that I picked out ended up putting the cab in the right spot so everything to the front lined up. I only ended up putting one shim on each side for the fenders.


I won't have much eye candy for awhile since I won't be doing more bodywork until spring (hood and bed assembly), but at this point I'm just excited to start wiring and get it running in the next couple months. 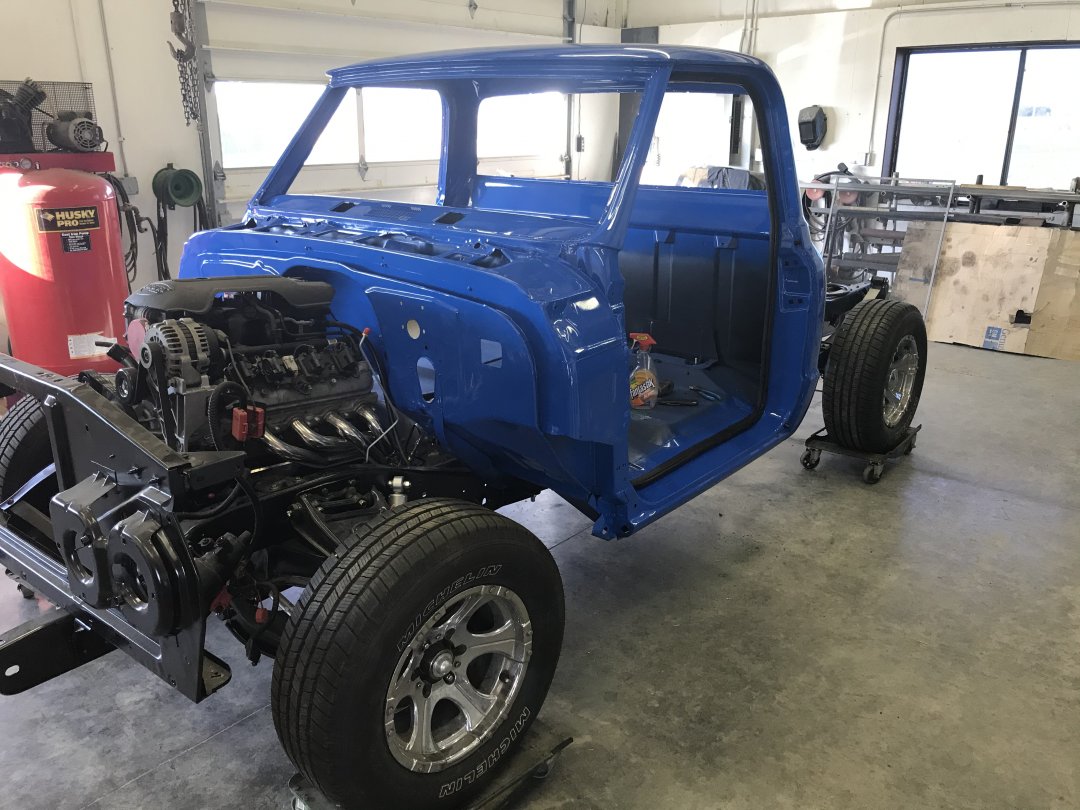 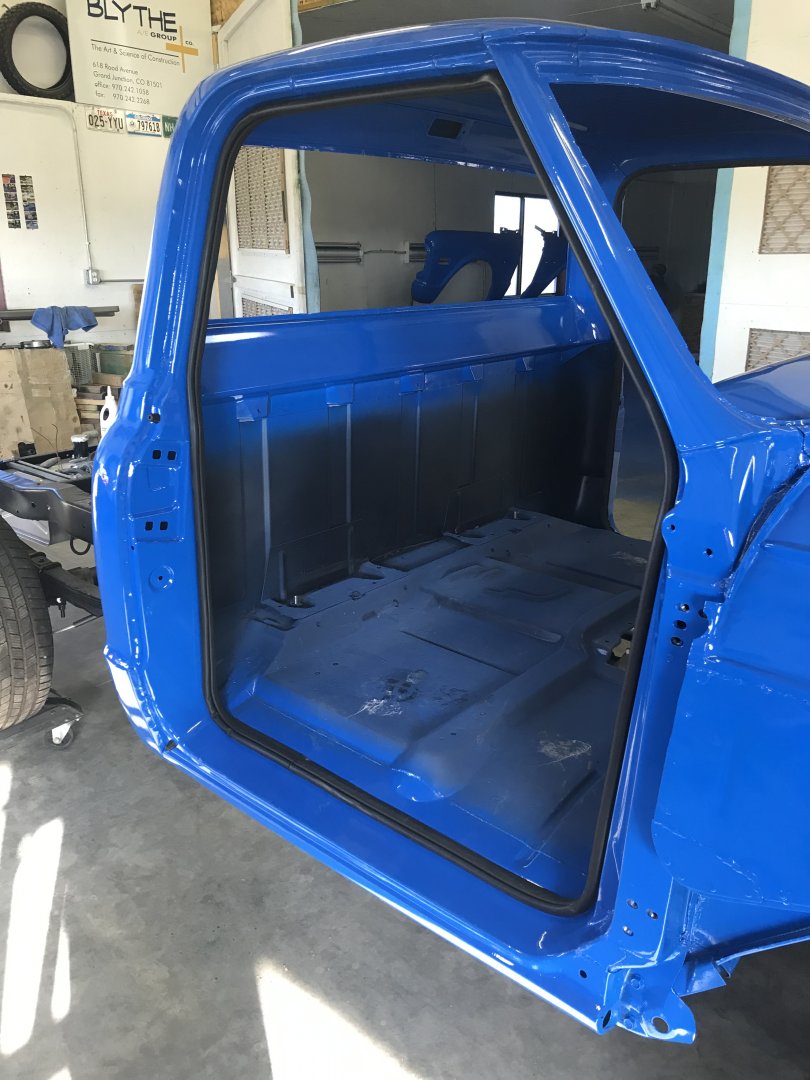 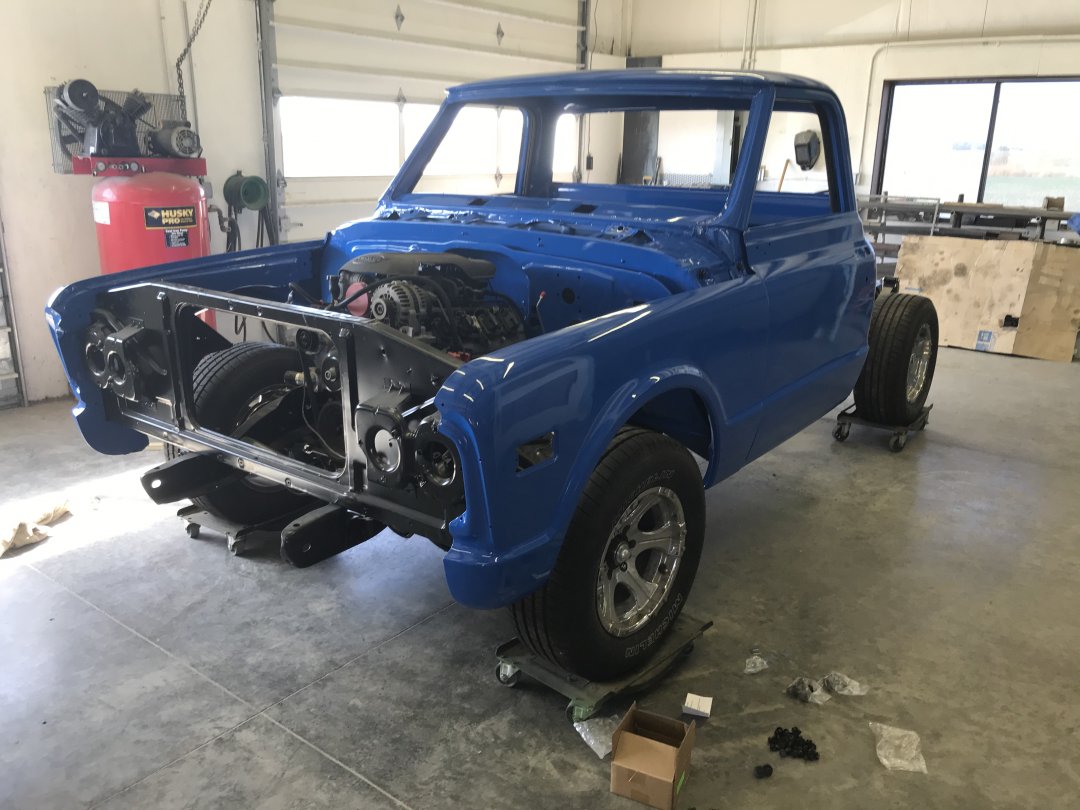 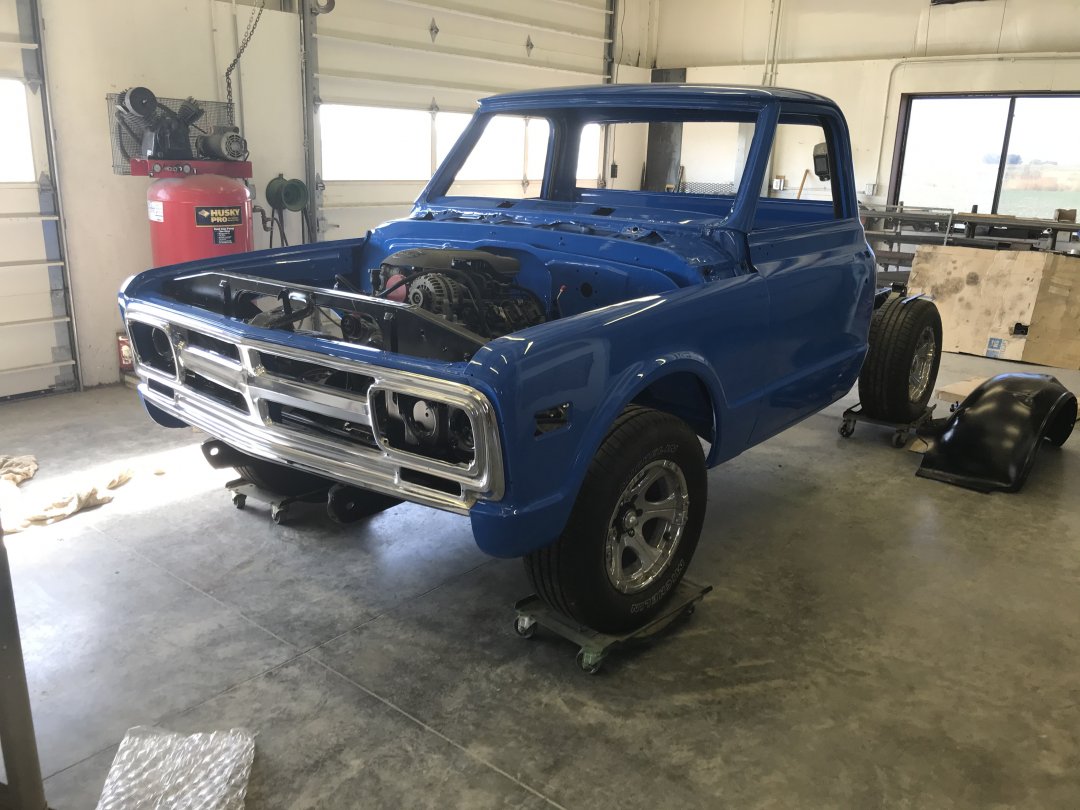 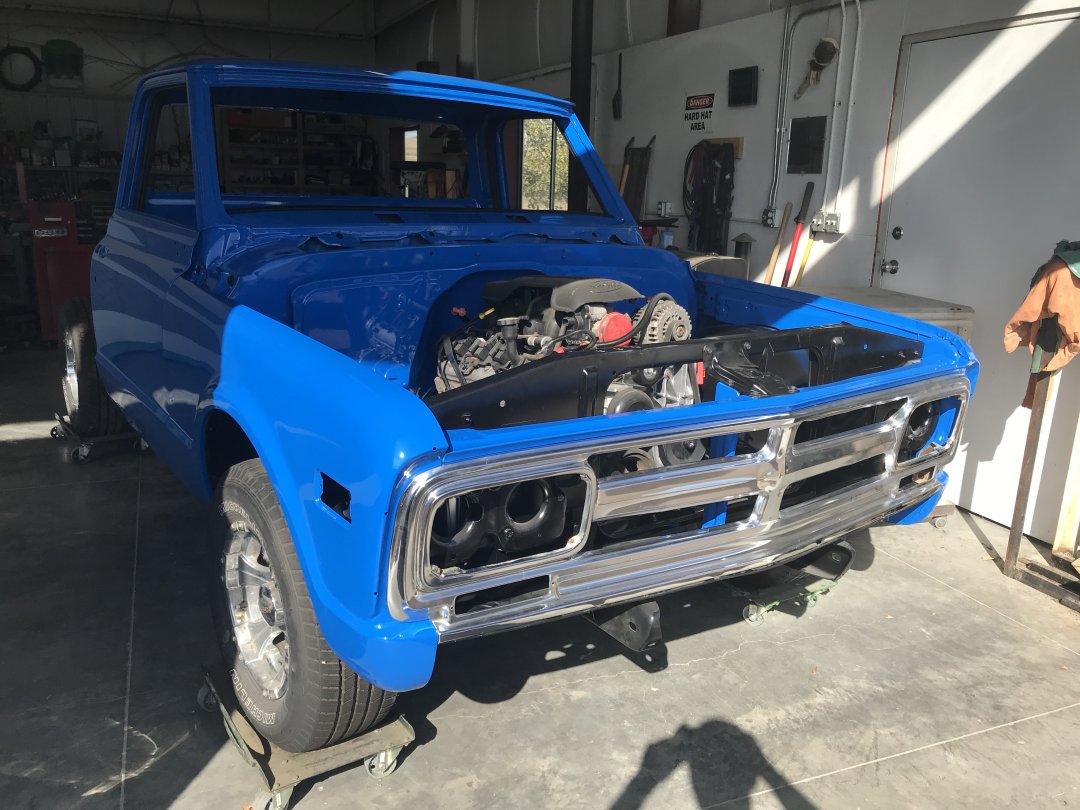 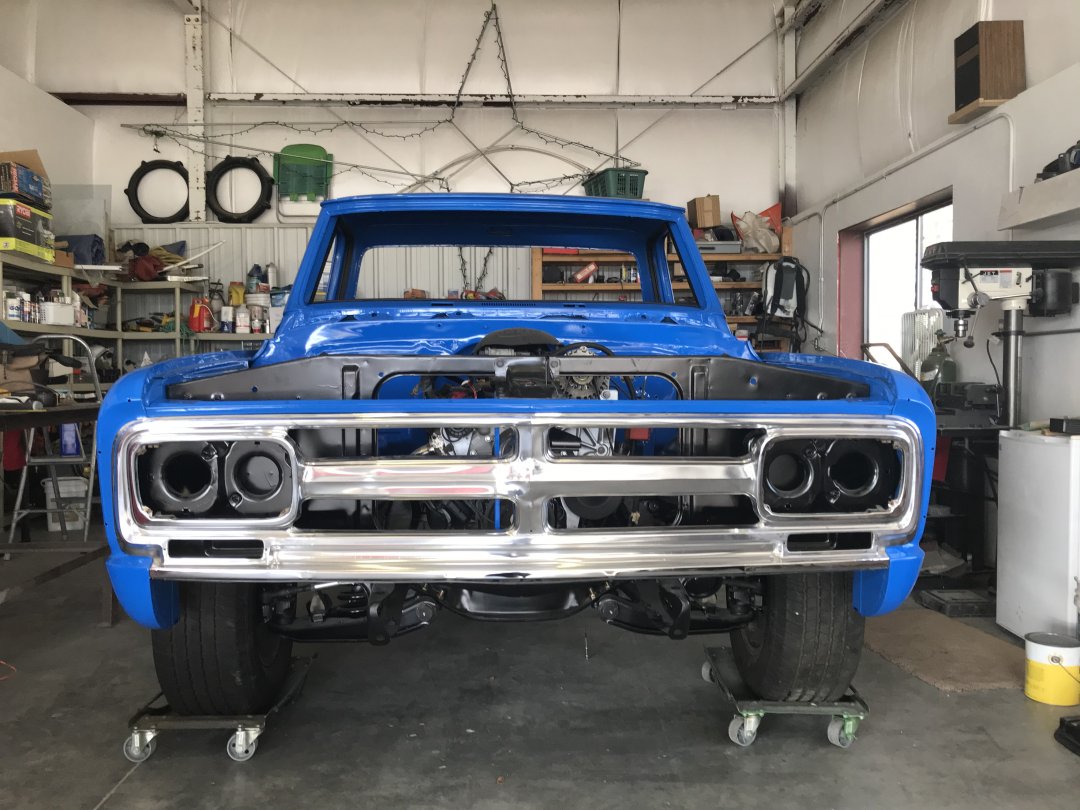 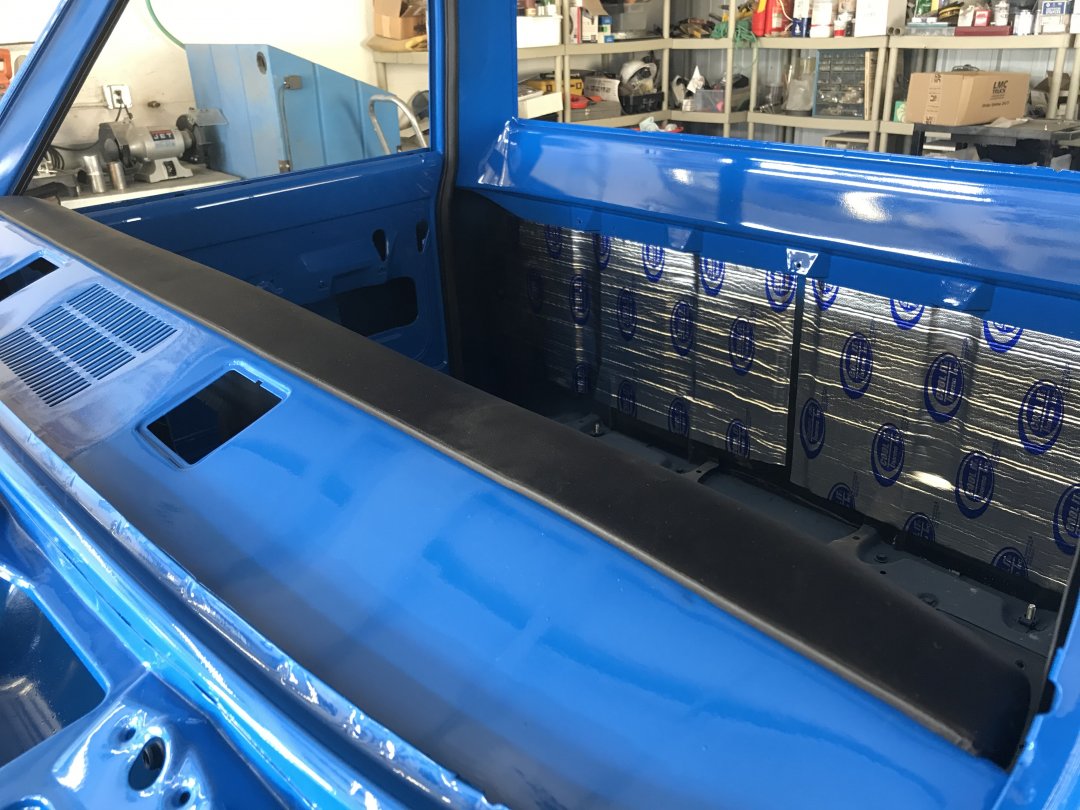 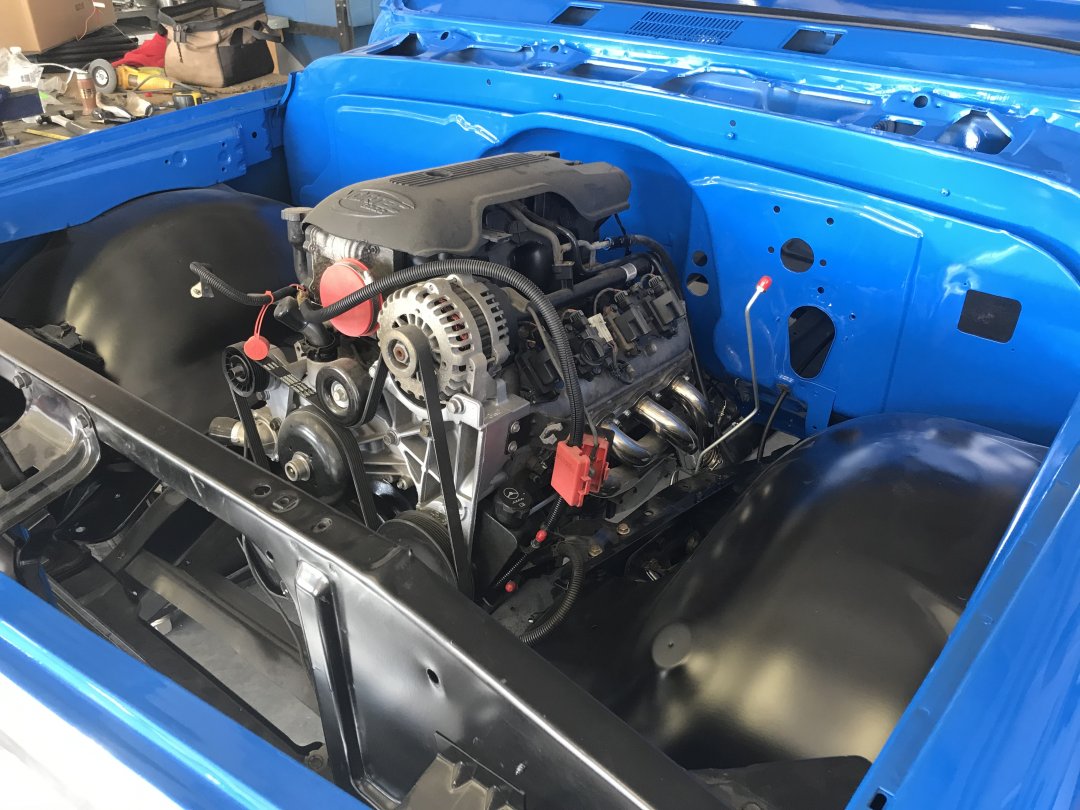 It's been awhile since I've updated my progress. I've been wiring, plumbing, testing, and getting things ready to hopefully start it for the first time this weekend. 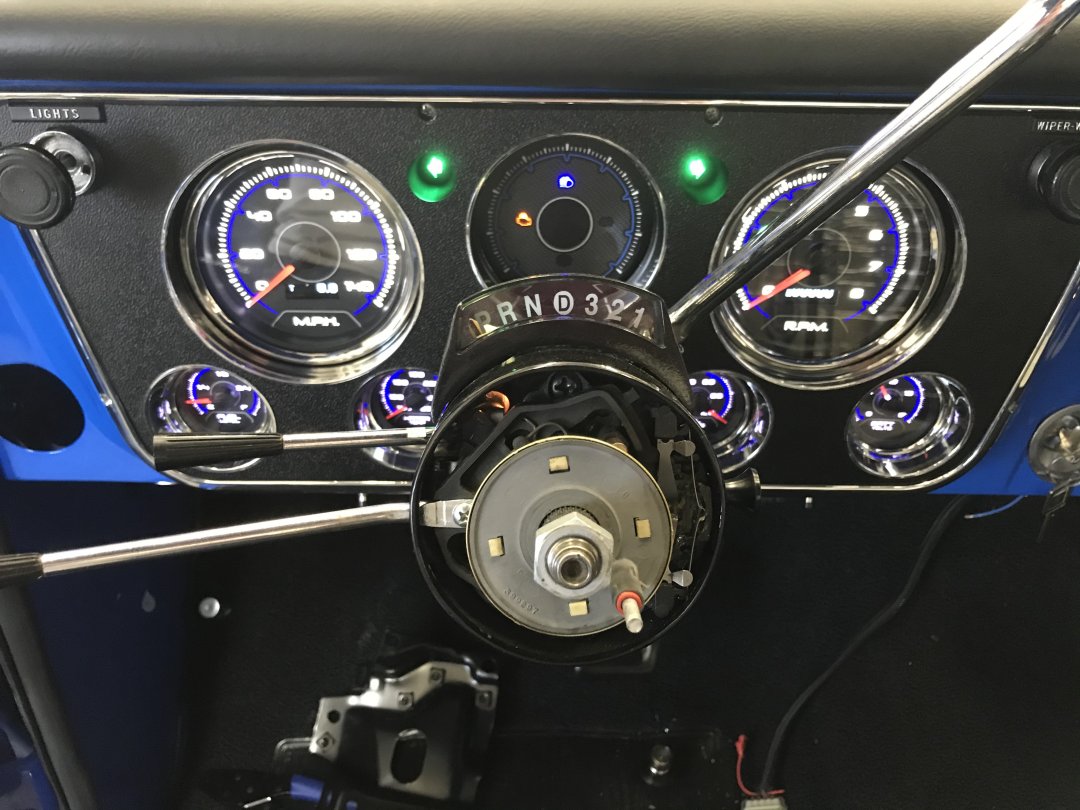 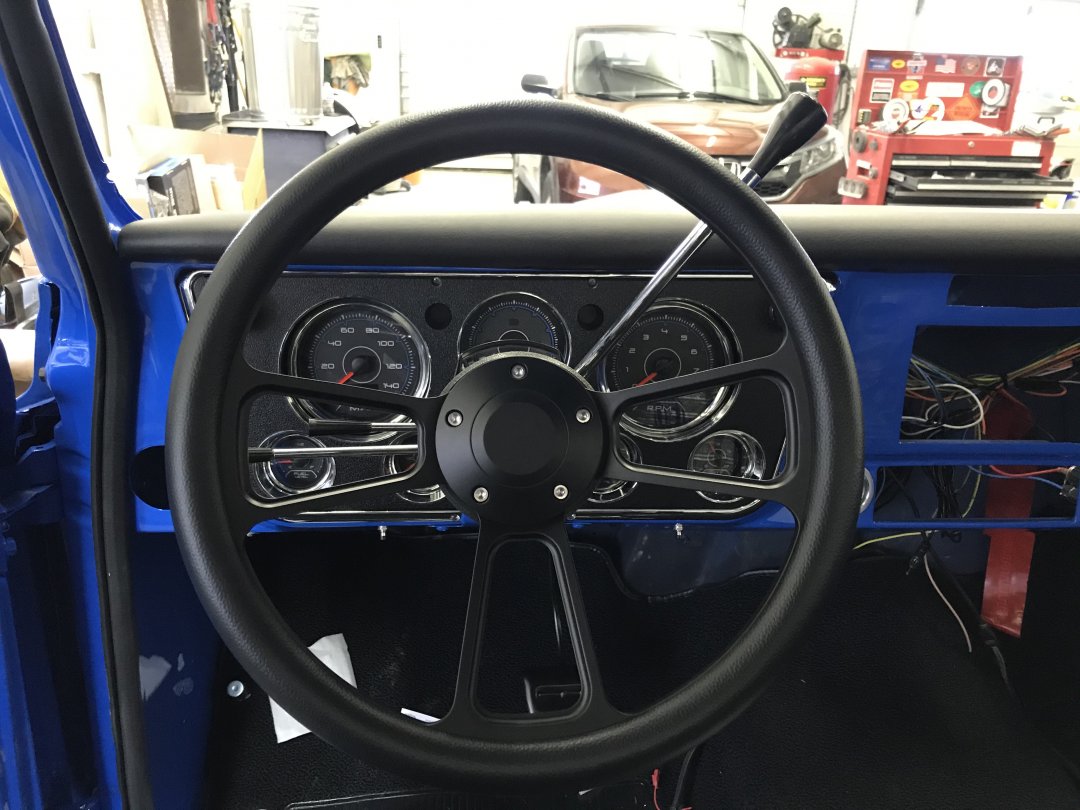 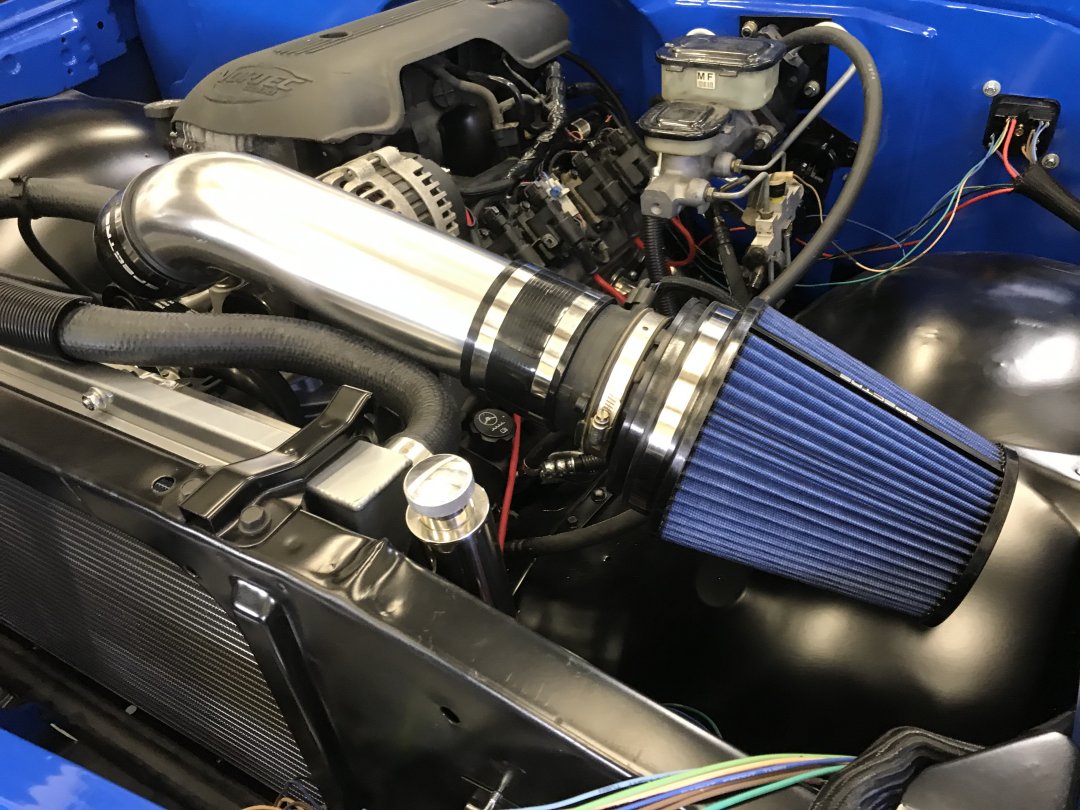 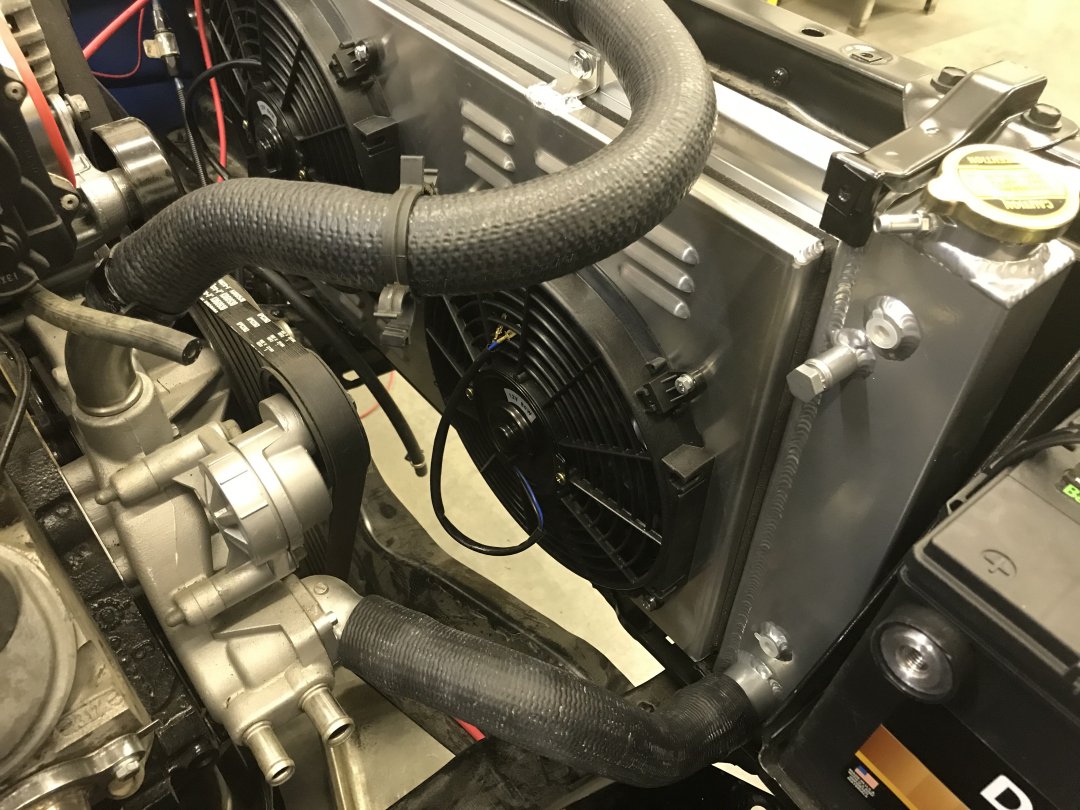 Nice build. Giving me motivation to finish mine this winter also. Looks bad a$$!

Syclone3Mt said:
Nice build. Giving me motivation to finish mine this winter also. Looks bad a$$!
Click to expand...

Thanks. It's gone really well and I can't wait to get it complete so I can actually drive it. It doesn't have a bed or any glass in it so it's not as fun to drive as it could be yet. 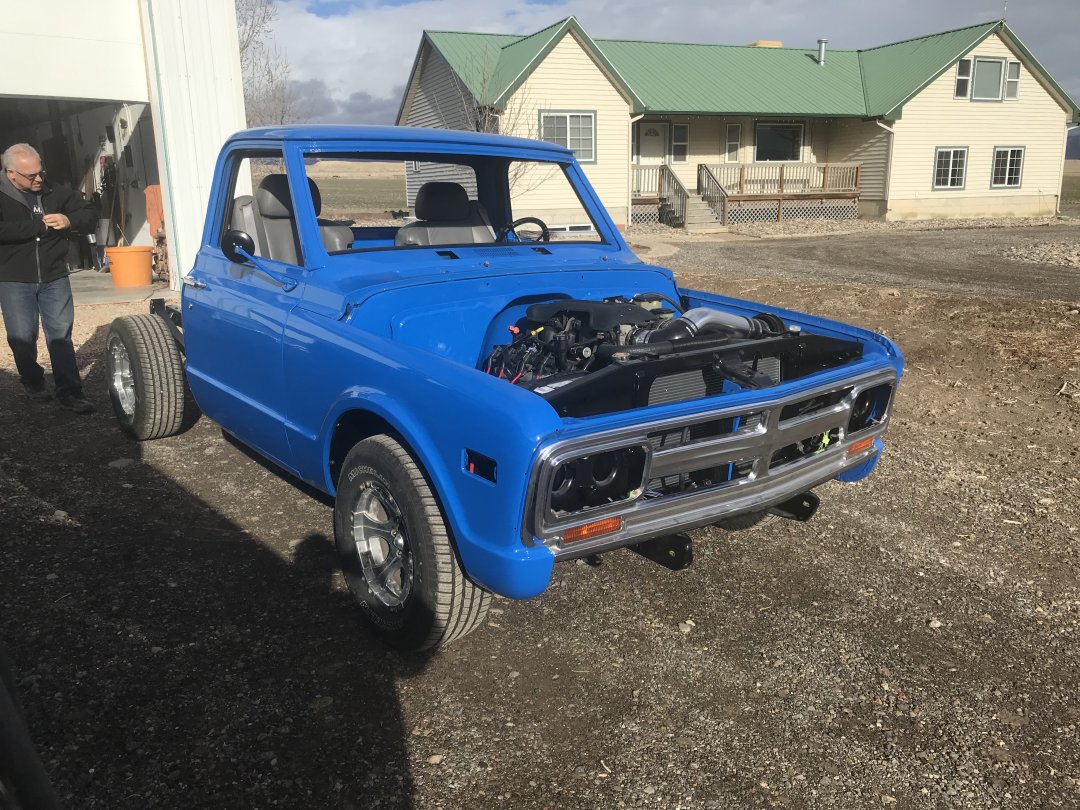 I had the day off yesterday and got most of the sound system done. We built a custom subwoofer/rear speaker enclosure that also stores the amp. I bought shallow subs and wrapped the enclosure in vinyl and hooked up the Alpine unit and everything worked! Just have to install front speakers now and the sound system will be done. 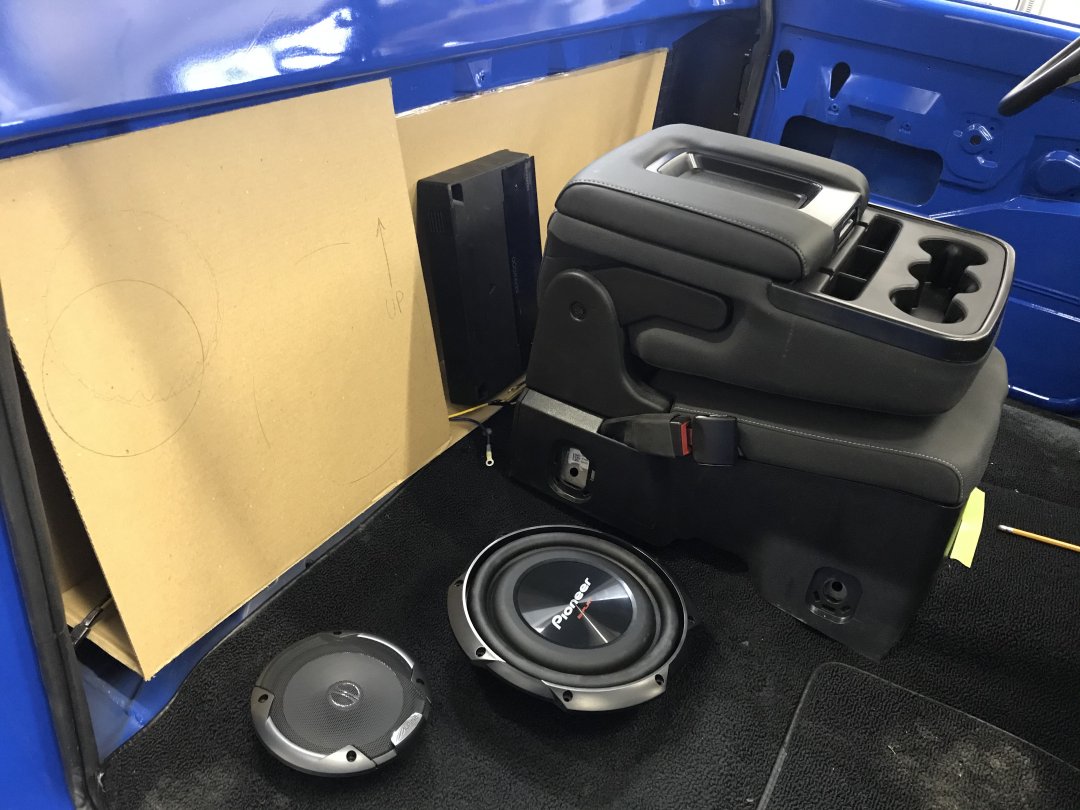 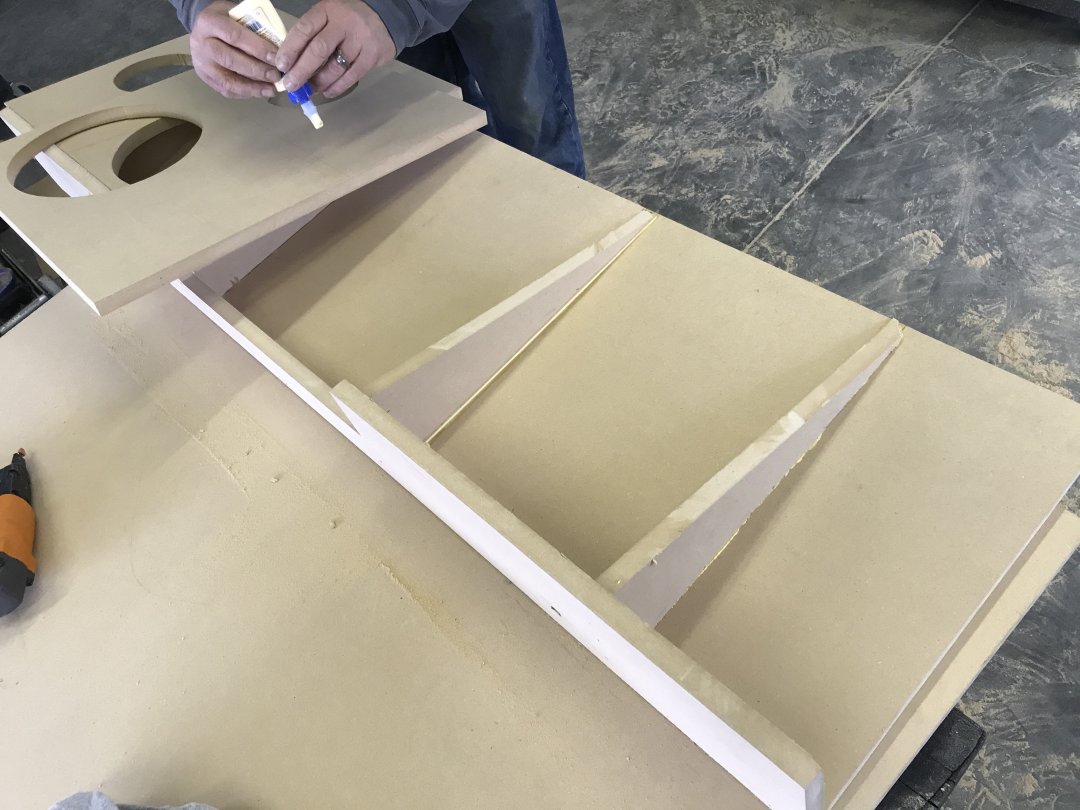 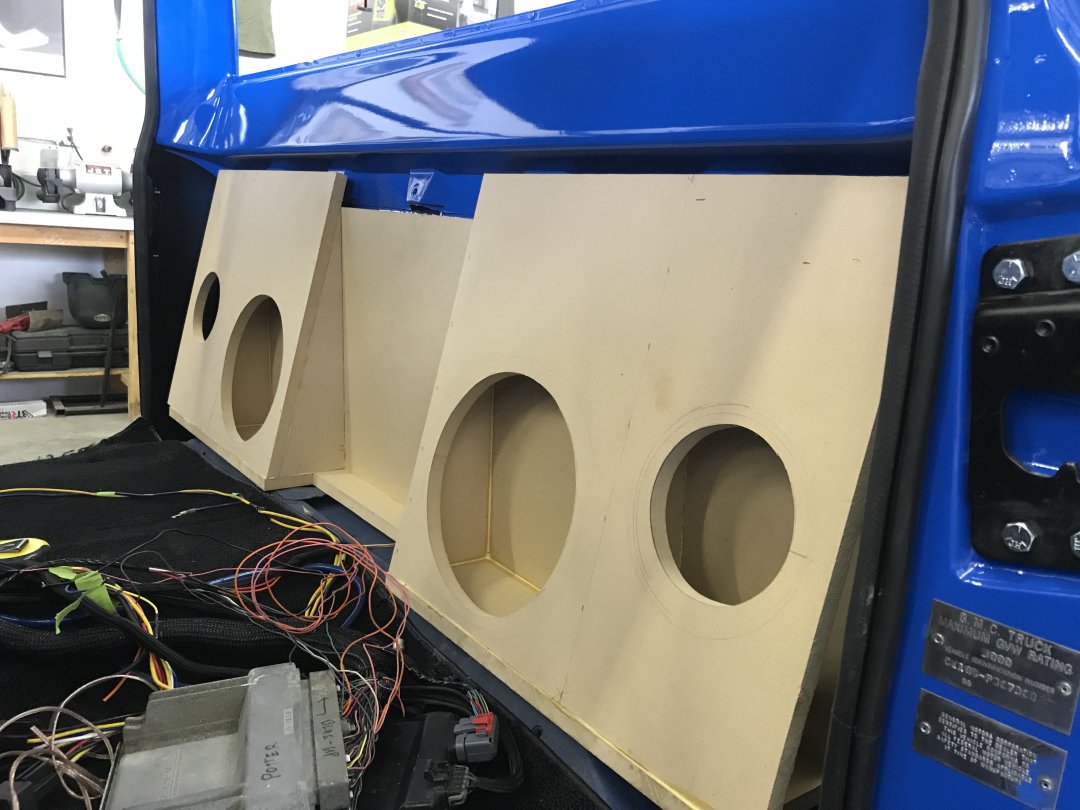 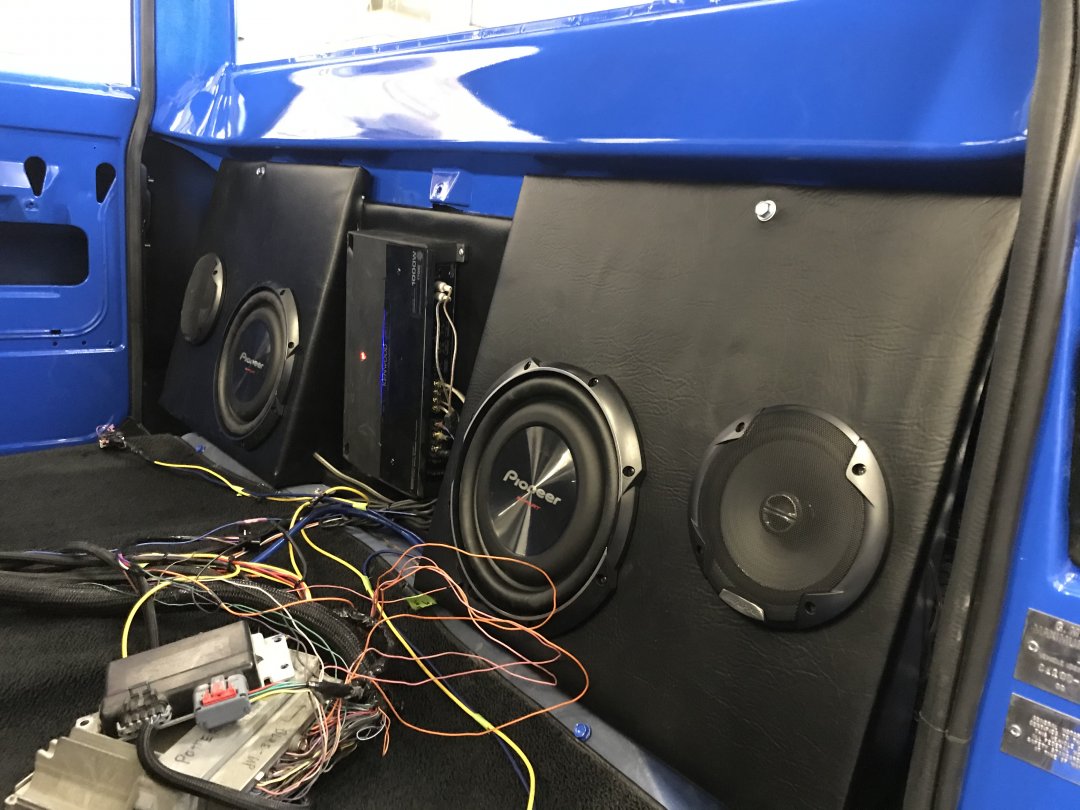 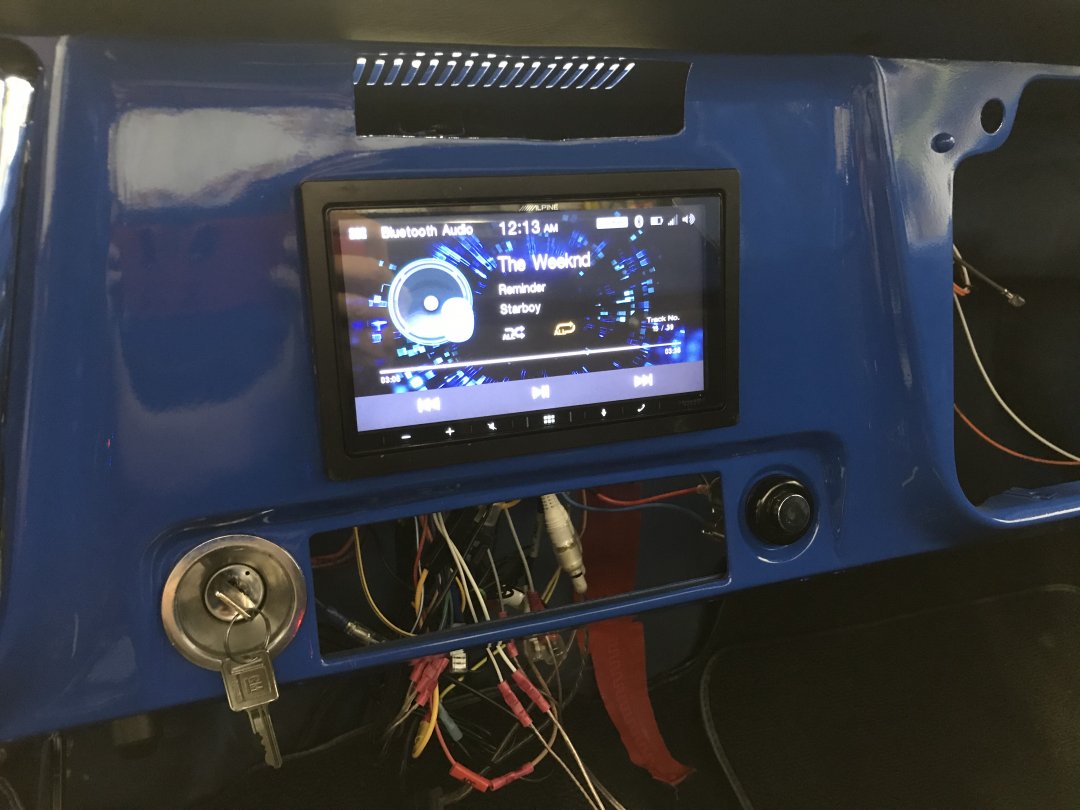 Front end is coming together. 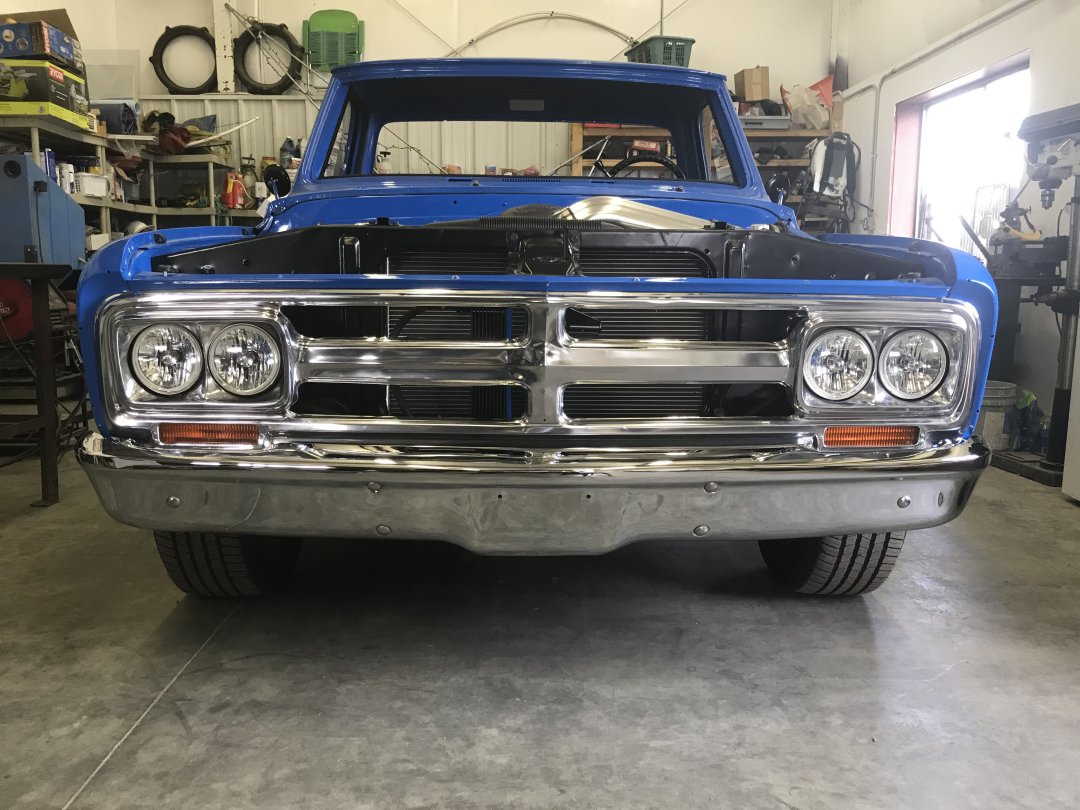 Every time I see your radio I wish I would have done the same with mine.

sprint_9 said:
Every time I see your radio I wish I would have done the same with mine.

Thanks. It's the stock grille and headlight bezels, new headlights, marker lights, and bumper. The grille isn't perfect, but it polished up really well and I didn't expect that an aftermarket grille would fit as well.

I'll take a decent OEM part any day over junk aftermarket. That grille looks great in the photos!

The process of making an aftermarket bed assembly work has begun. We got the floor, front panel, sides, tubs, and tailgate all put together. A list of the modifications:
-Trimmed 3 out of 4 front/rear edges of tubs. They were pretty wide and were resting on the ridges in the bed in most spots.
-Elongated the holes in pass side tub where it bolts to the bedside. The whole tub needed to move about 1/4" rearward to get holes to line up with the floor.
-Elongated the top two holes in the front end of the bedsides where the bolt threads into the captive nut of the front panel.
-Trimmed excess material from the tailgate so the linkage could fold up completely.
-Cut and rewelded the pockets in the bedsides where the rear cross sill slides into.
-Elongated a couple holes in the tubs/floor so they would bolt up
-Trimmed excess material from driver bedside where front panel curl slides into the bedside.

Not trying to steer anyone away from buying an aftermarket bed, this is just a list of what I encountered and I don't think any of it is unreasonable. It's just what you have to do with aftermarket sheet metal. I still have to fit the skirts, those will take some modification too. Spoiler alert - we bought another 67-72 but we found a factory shortbed to put on it. So I'll have experience with a nice clean aftermarket bed assembly and the fitment issues that come along with it as well as the experience of taking apart and refinishing and repairing a factory bed soon.

So we got the bed set on the truck and man are the wheel openings on these trucks huge! I'll have to do something about that down the road because these tires are way too small. I could easily fit 20's with low profile tires. These wheels and tires were on my dad's 64 which has much less room in the rear wheel well compared to the 67-72's so they're pretty undersized. Even with 4" drop springs in the rear and 2" of drop in the front, I still have loads of room for wheels & tires. The pictures make it look worse than it is, but still something to deal with. 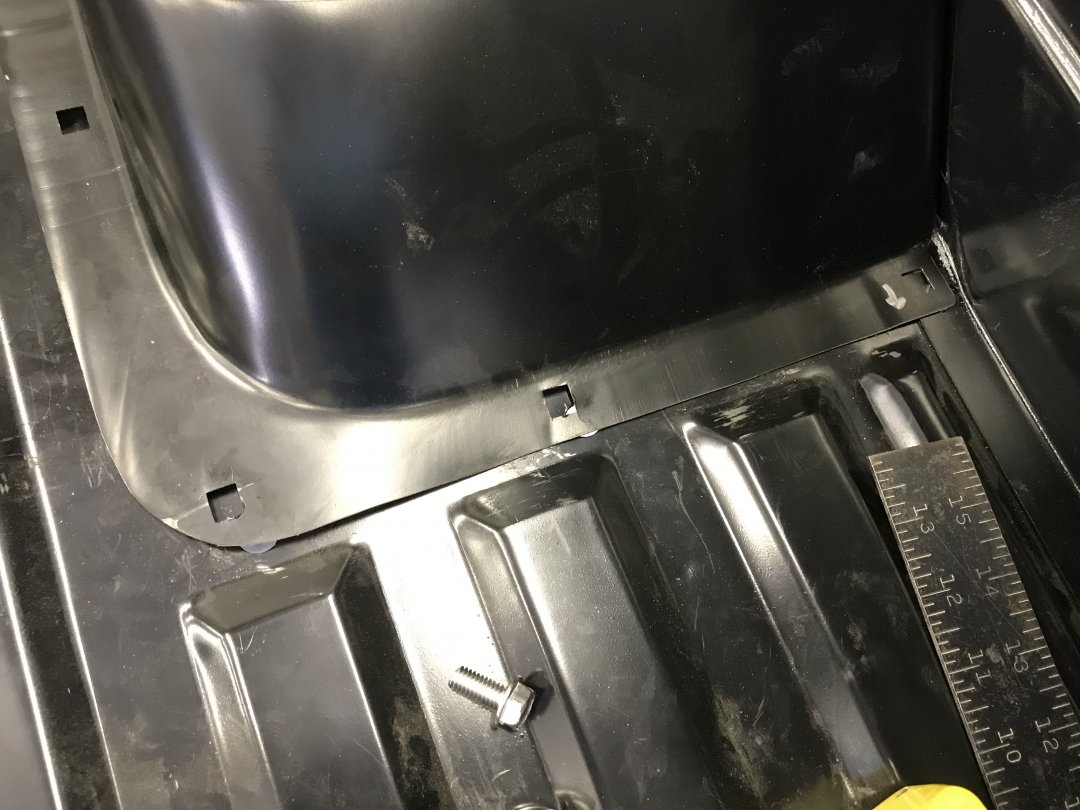 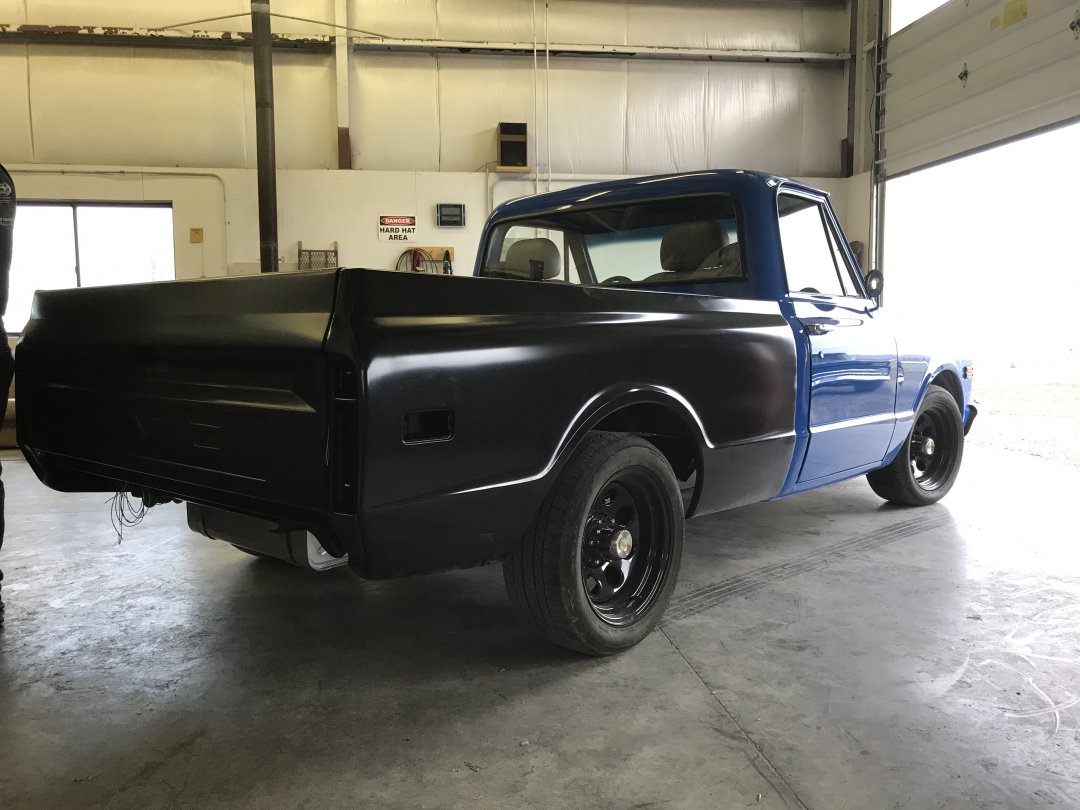 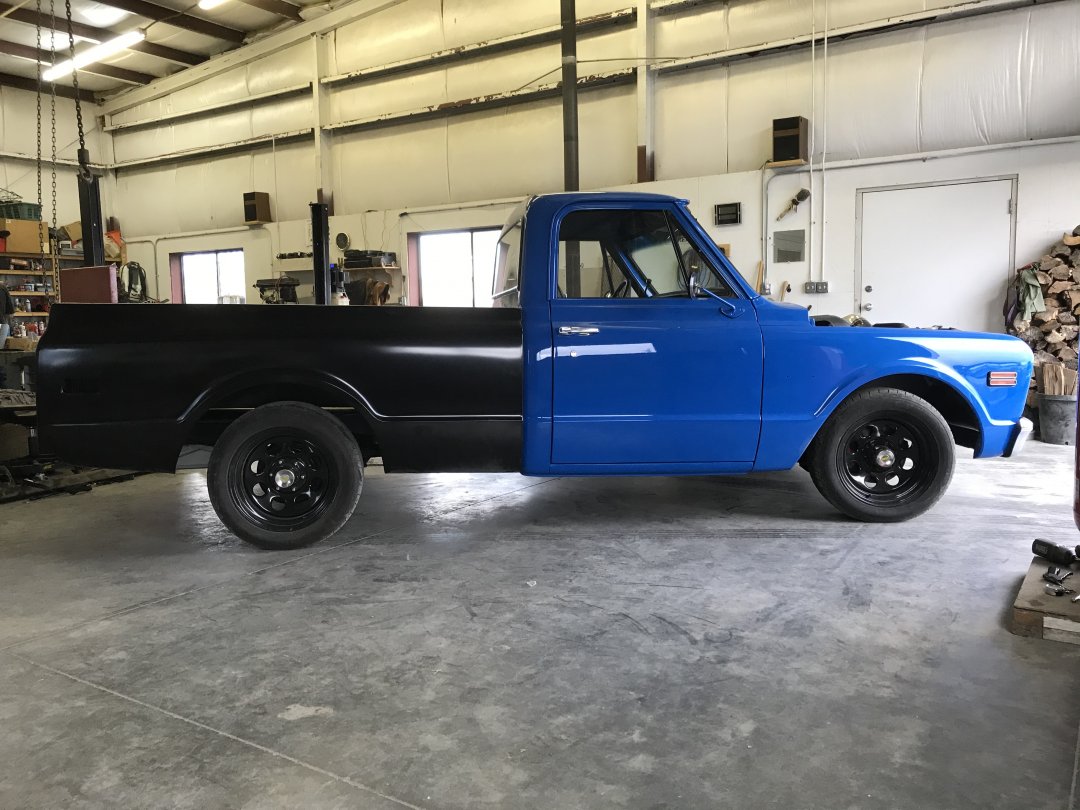 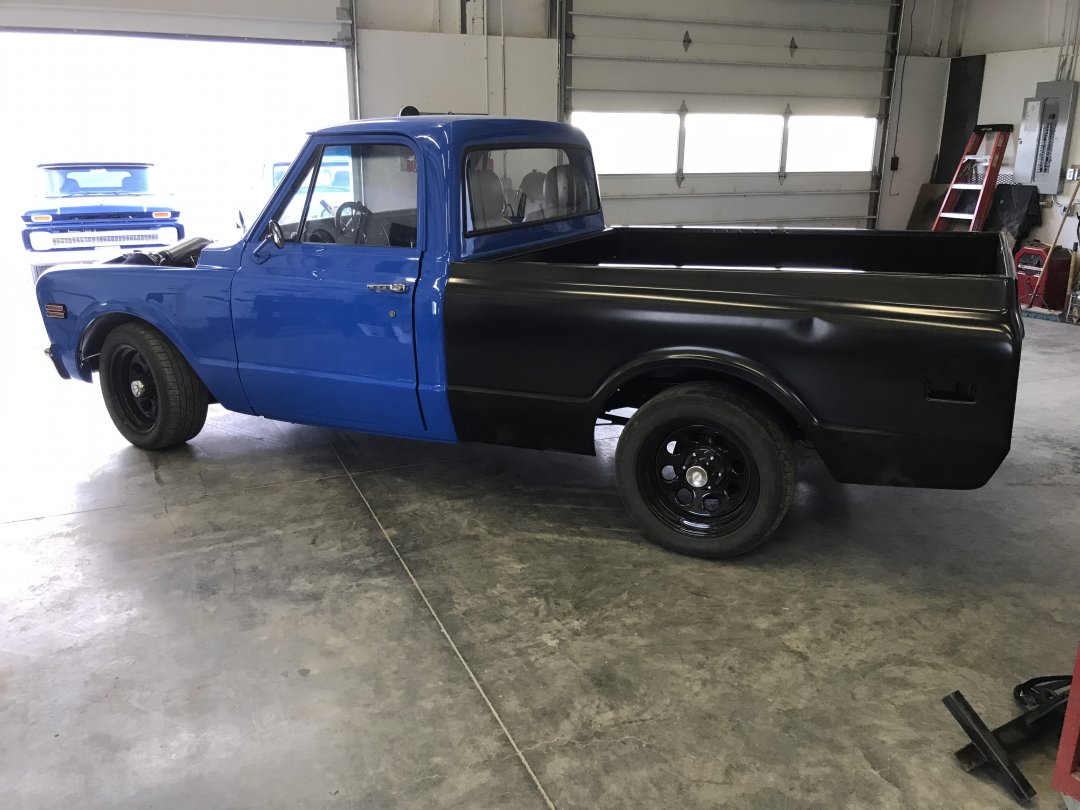 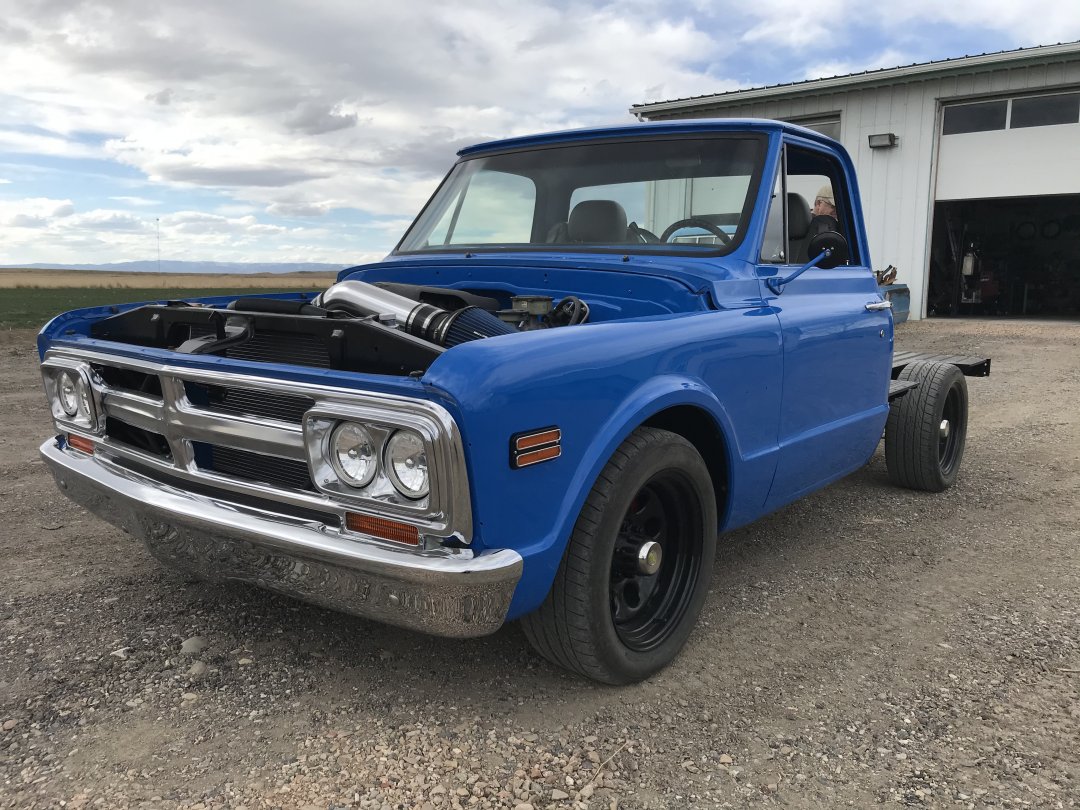 Is that a "low spot" on the left quarter panel.

You can call it character or shipping damage! Not bad considering these panels came all the way from Taiwan...

Just keep the floor jack away from that thing to avoid anymore dents,

One of the side effects of cutting a LWB down to a SWB is having to re-drill the bumper bracket mounting holes. It was a bit of a struggle though because of my leaf spring hangers, the fuel tank being in the way, and the bed being on but all necessary obstructions. Unfortunately it was nearly impossible to use the forward most hole in the inner bracket because the hole landed about 1/2 on 1/2 off a rivet and was impossible to access with the fuel tank in place so I opted to use the stock rear hole of both brackets and drill another hole a couple inches forward of that. This new hole goes through about 5 layers of steel (frame, leaf hanger, bracket, bracket reinforcement) so it took A LOT of drilling. Not the ideal setup, but this truck won't be going to any demolition derby's and this should hold it okay. We spent the good part of the day working on this.

Then we spent about an hour filling the stake pocket holes for that clean look. 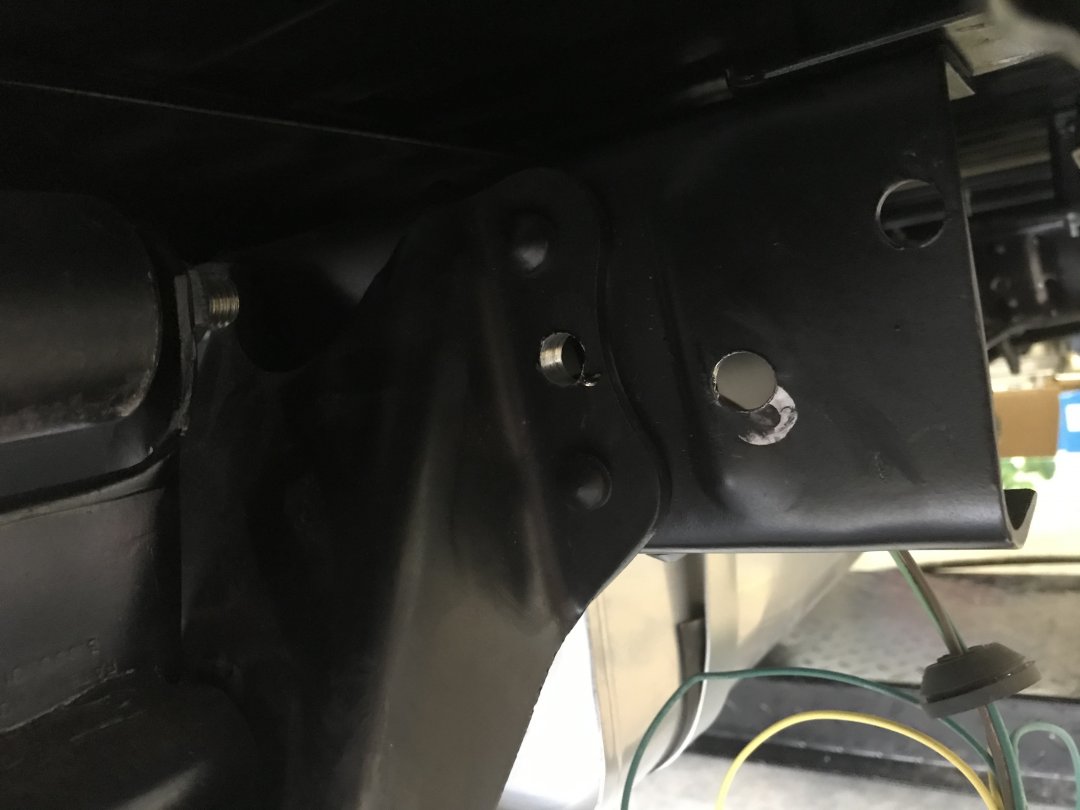 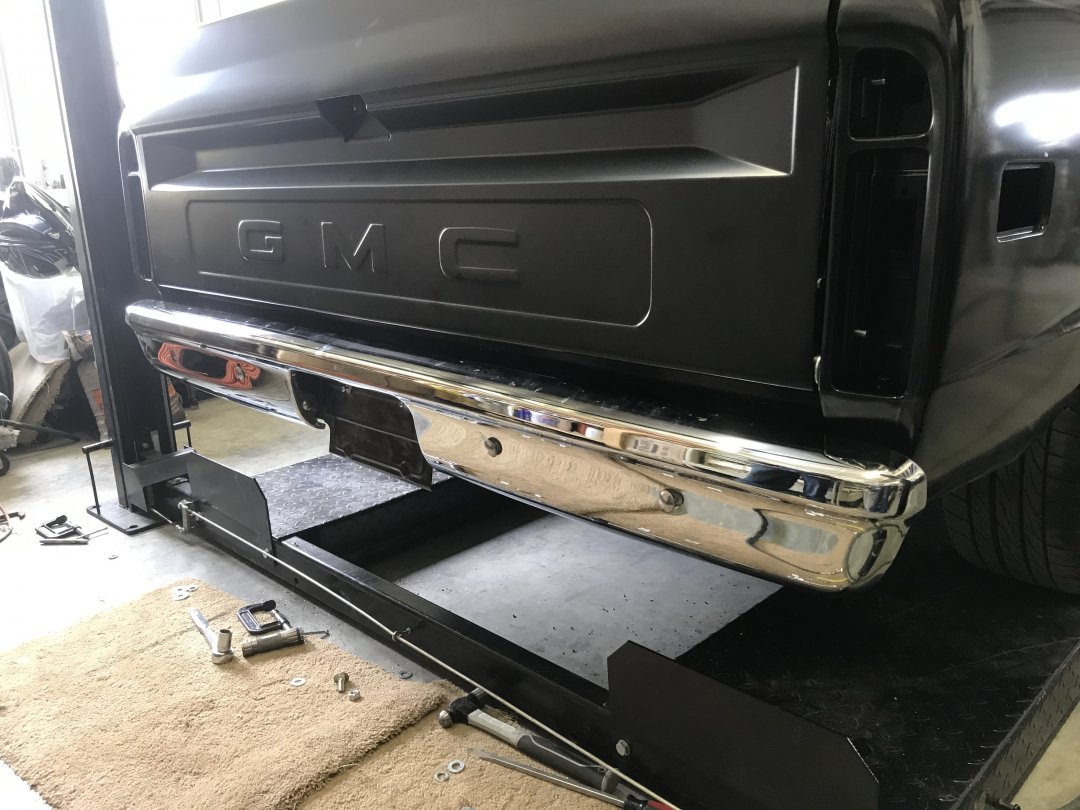 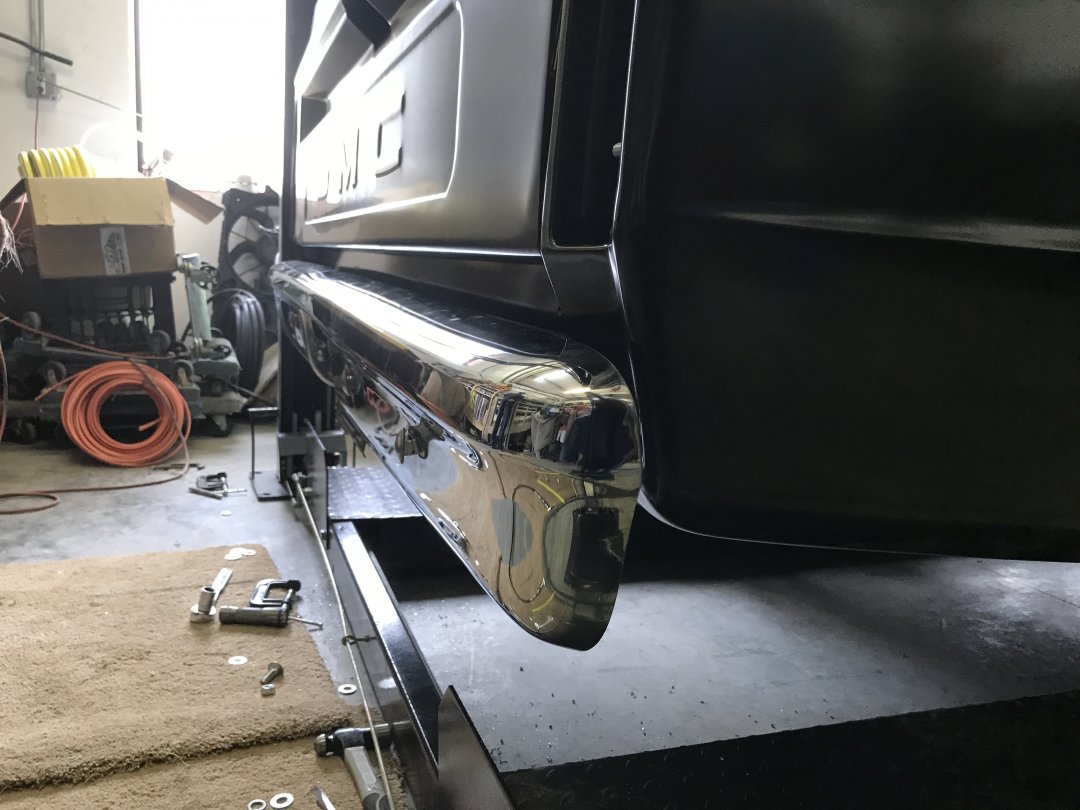 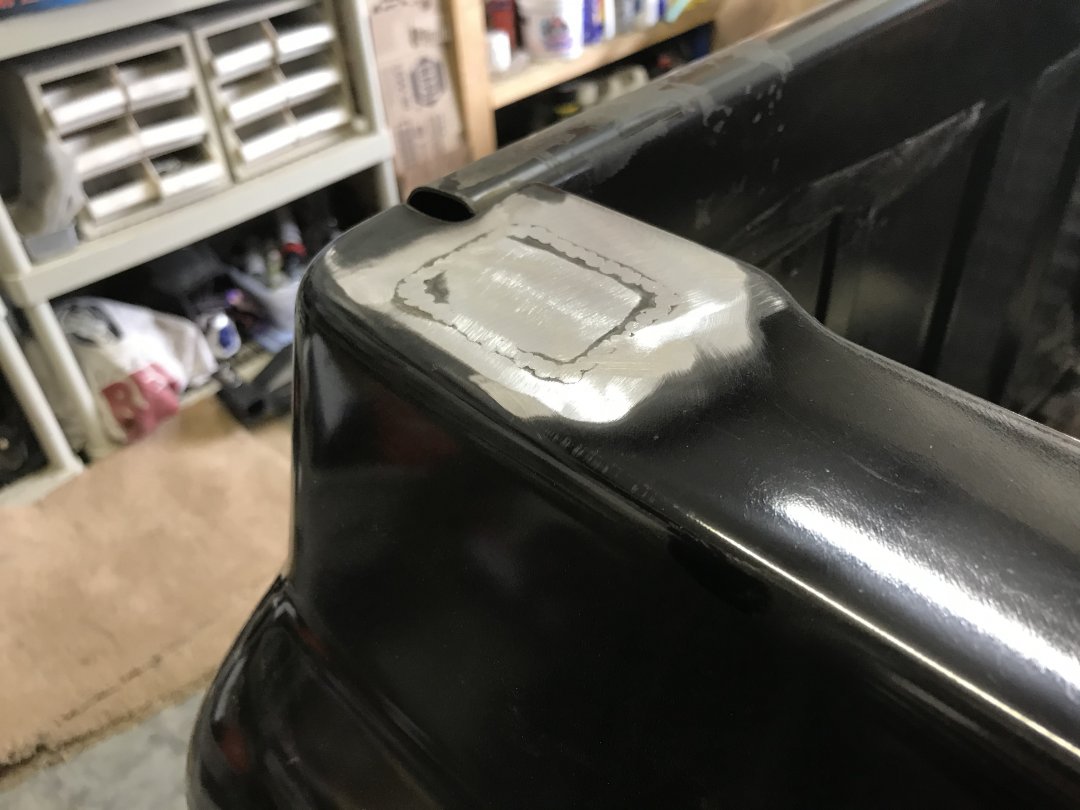 Amazing how long it can take to do what at first appears to be a simple task. This is one of the reasons you never quote restoration work.

I got lucky with this, seems like the later frames had more of these holes included regardless of lwb or swb.

I feel your pain, went through the exact same process on my 72.