Back pain, back issues

metalman said:
You heard of one now. 7 years plus, it's still good and it didn't take 6 months to recover, more like 2 months. I was bent over like I was 100 years old and in constant pain. Every case is different that is why the problem needs to be identified correctly and the treatments will vary depending on what the problem is.
Click to expand...

And now you've heard of another. I had lumbar fusion surgery 2 1/2 years ago. I got my life back! Recovery was rough, 3 months of being basically helpless and then 3 months of light duty. But now, 100%.
And as long as I take care of my back, lift correctly (and never, ever bend and twist at the same time) and stay in reasonable shape and weight, I am good to go.

Here is pic of seriously medieval looking hardware whey put in.
Funny thing is, the surgeon said the metal is useless after the bone graft, it is only there to support the fusion while it is forming. They could take it out now and the joint would be just as strong. Doc said if I ever get in a crash and break my back, it will not be that joint. 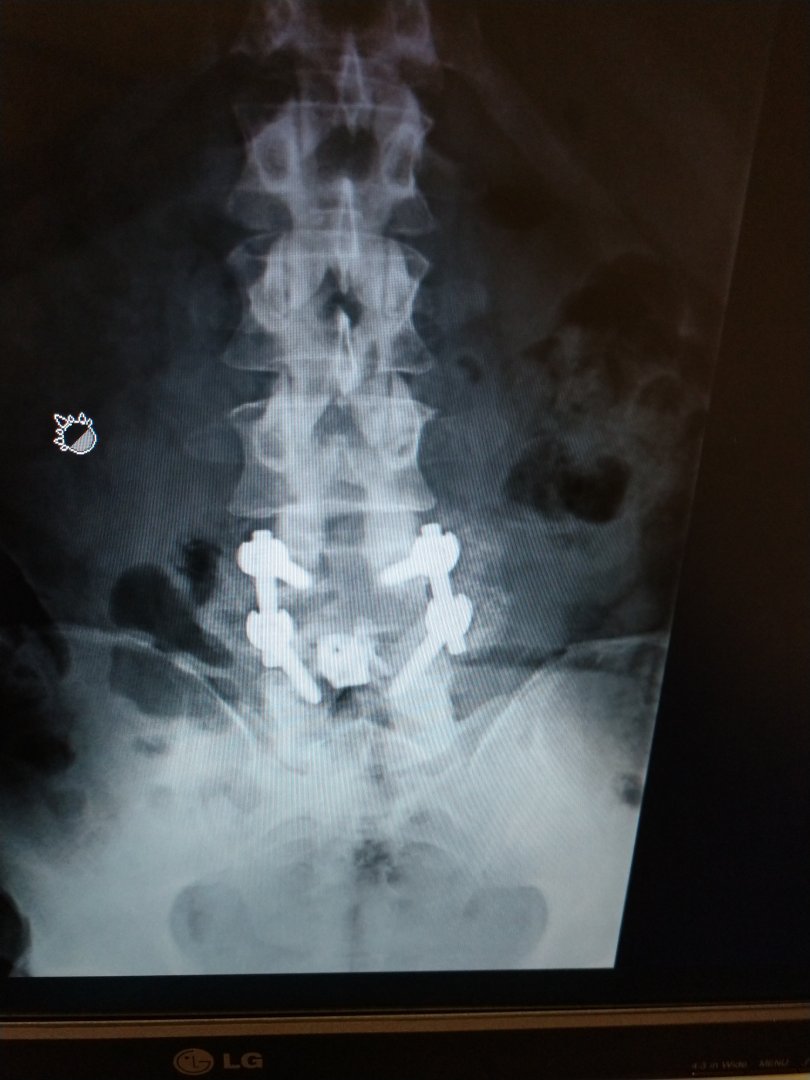 Chris, seriously, see a top notch back/spine specialist. They are amazing. And many issues can be resolved with PT, steroid injections, or other non-invasive therapies. Just no reason to be in pain.
Best wishes!

So sorry to hear this Chris. I feel it is part of the body shop life.... But please see the right doctor to find out what is the problem. I am 66 and work on Core and overall strength training to prevent or help prevent back pain. When I do have pain ICE works for me. I know you are in pain and don't want to hear this but hopefully some good advice from the guys.

Jim C said:
I have them sometimes every day, sometimes every other day. Will be like that for 2-3 weeks then i get a week without then they start again. The trick is keeping them under control and you need to take something the second you even feel like there is a chance you might be getting one. If you do that then they never amount to anything or even bother me. I do see a migraine specialist a few times a year. I only get a couple a year where i get stuck without med and it spirals out of control. In those cases your def not working. Your just non stop puking for hours. It sux
Click to expand...

What do you take for them OTC or Prescription?

Both. I have been on aimovig for about a year and a half as a preventative. If i feel one coming on then i usually take maxalt but sometimes i can get away with an excedrine migraine if its the tension type at the back of my head.

Jim C said:
Both. I have been on aimovig for about a year and a half as a preventative. If i feel one coming on then i usually take maxalt but sometimes i can get away with an excedrine migraine if its the tension type at the back of my head.
Click to expand...

Have you looked into Magnesium supplements? I've read good things about it.

Yes, did all that a few years ago and had zero effect

I popped my back lifting a speaker out of my bedroom window when I was about 16. Ever since then when I twist or move wrong that catch between my shoulder blades pops back out and it about puts me to the floor. I use to go to the Chiropractor and it would pop back in but about 20 years ago I went one morning before work and the next thing I remember is being asked where I wanted to go to lunch. I had and still have no recollection of what I did that morning it is gone so I really don't want to go to a Chiropractor again. Just Saturday I was carrying the garbage out side and I twisted wrong and out it popped.. been miserable all week but working on the Valiant after work this week it seems to have popped back in... I feel for you but have never had it quite that bad. It is put me on the ground and taken my breath away be not so I could not get back up again... get better soon.

the inversion table will let gravity reset your spine and help disc resettle. doc told me to get it 20 years ago .

I sent this inversion table to a friend after car accident yrs ago but never set it up or told me.
Good reason to call her later & catch up. She got married heh.

Was going to reply last night but too laid up to try and type, laying on a creeper yesterday, went to get up and it was all over. I just pulled a muscle, but man is it sore. Not my usual issue so that is nice I guess.

Ive had major problems in the past, when I was 24 I was working at the local grocery store. I had a large amount of ice bags to stack, 3 or 4 pallets about 8 ft high. In the process of that I bulged my L5-S1 disc, the pain took a day or two to set in but when it did it was unimaginable. It got so bad I had to be hauled off on a back board in the ambulance, once at the hospital I was placed on a morphine drip, a couple steroid injections, an MRI, the whole package. A couple years later dad thought it would be a good idea to unload some 4x10 sheets of drywall. I twisted and lifted at the same time and the noise and feeling of that disc just hit me. I had to sit down and compose myself because I knew what had just happened and the flash backs of that unimaginable pain was to much to think of. I told him we need to go to the hospital right away otherwise Im going to be in the ambulance again. Luckily I was able to get a steroid injection and avoid the severe pain and just be laid up for a couple weeks.

After all of that I focused on proper lifting, building my core muscles up, and trying to stay loose. Trying to strengthen the muscles that support my back has been well worth the effort, I still have issues, but its manageable now.

I wish you the best Chris, any back pain at all is not fun, and a lot of people know this all too well.
S

Lower facet joints are a weak spot by design, lots of leverage on the lower ones, they're tiny and have poor blood supply and therefore do not heal well after damage. Ice, not heat increases blood circulation to relieve inflammation and helps recovery. Traction (inversion or stretching table) helps relieve constant pressure from standing and resulting inflammation. Ice and inversion or a stretching table are your friends. Careful with inversion and potential aneurysm.

I have no words of wisdom Chris. Just here to add my support and let you know, you have been in my prayers.

John Long said:
I have no words of wisdom Chris. Just here to add my support and let you know, you have been in my prayers.

Thank you John. I'm doing better. Still in a lot of pain but able to move around and work a little. Considering on Tuesday night I literally couldn't get out of bed, I'm very thankful.

I've ordered one of those inversion tables so I'm anxious to try that out considering all the positive comments about them. Thanks everyone.
S

Ice it lots Chris, i know no one likes ice but if youre already immobilized just do it. Hoping you make a fast recovery.

never ever use a heating pad .

Chris_Hamilton said:
Thank you John. I'm doing better. Still in a lot of pain but able to move around and work a little. Considering on Tuesday night I literally couldn't get out of bed, I'm very thankful.

I've ordered one of those inversion tables so I'm anxious to try that out considering all the positive comments about them. Thanks everyone.
Click to expand...

I wish I would have gotten it from Walmart, found it on ebay at an indiana address. Just a couple dollars less, but got to use the paypal credit for it. Just let me know its in shipping, which means it is probably being sent from a warehouse in california.

Chris
Try all the above recommendations. I have and some help and some will not. I’m 52 years old and 4 ruptured disks /5 surgeries (2were fusions) in the last 20 yrs plus a Spinal stimulator to help reduce the nerve pain in my back and legs. 20 total surgeries! I love my chiropractor but I was the only patient he could not fix. BAD genetics!
Please Please don’t ignore the medical profession as an option. Some times they are the the last option. I have had basically everything except nerve burning done to me. Finally after 3 months of a massive flair up of something I ended up on 3 new meds from a neurologist. Helped way better than anything else. My point is don’t settle with pain - keep seeking answers though they are hard to find some times. Drs can help you differentiate between soft tissue injuries or structural problems. Very important to know your issues and how to treat. It took me 20 years of suffering and coping until the right combination of things came along. No I’m not as good as I used to be but I’m still “the little engine that kinda can”
Dave

PS an X-ray will NOT show a bulged or ruptured disk. Get the real answer and get the MRI.

shine said:
never ever use a heating pad .
Click to expand...

The heating pad is a bad idea if there is injury. Example. Pull back and later that night use heat pad. No thats not a good idea. My personal opine but I think the human physique is a poor design. Walk upright. Gravity constantly pushing down with a pouch (gut) in front = back problem . I deal with these types of things on a daily basis at work. Knee pain back pain. Hip pain. 90% of the time people are over weight. I'm guilty of it too. Stretching is the best thing to do. Keep the blood flowing.
You must log in or register to reply here.
Share:
Facebook Twitter Reddit Pinterest Tumblr WhatsApp Email Share Link
Top