Awesome video @Chris_Hamilton thanks. I am going to sacrifice some work done to strip and shrink a part of my hood that is oil canning with his techniques on the Dart... I forgot I bought a slapper a while ago and never really knew what to do with it. Now I do.... that doesn't involve my kids when I'm mad at them.

Is your Oil canning from damage, from welding, or from fatigue?

Unknown really. It was not from welding. It was just filled with waves and small dents. Could be from a past restoration media blast session, from people on the hood in the past. I don't know. The skim coat of filler tightened most of it up, all but this one spot square in the middle.

@MP&C so is the heat and spoon on dolly the right way for this?

Robert may have a different technique, but here is what I have done(learned) over the years .If you can tell where it's high then heat the high and simply use a body hammer and lightly tap the heated high spot (volcano). You don't need to have it red hot and you can continue tapping even as it's cooling because you are still shrinking. It's not necessary to back it up with a dolly, you don't want to hit it hard at all just tap it.
If you are having trouble finding the best spot to shrink it reach underneath and push the panel up. Run your hand over the panel till you feel where it's highest point is. That's where to start.
Don't use a big tip like a cutting torch tip. Use the smallest tip you have. Heat a small area about the size of a penny or so, till it's on the verge of cherry. then tap lightly with your body hammer. Less is more. Do one spot re-assess the panel and go from there. If you shrink too much, use an appropriate dolly and hammer on-dolly on the spot that you shrank too much. You want to hear the dolly ringing. If it's ringing you are stretching. Only hammer and dolly in the heat affected zone (HAZ).

Jim, to add to Chris' comments:

You indicate there was no welding, so that should mean no shrinking took place in the creation of your damage. That means dents, abuse (who knows what happened on the hood ) or other wise has stretched the hood in various locations, so you want no further stretching if you can avoid it.. The vast majority of removing the damage will be accomplished using shrinking of some form/fashion. Some of what appear as waves may be caused by damage pushing outward from another area. To isolate the areas and find the "cause", I would suggest the thumb trick to find the locks and work those areas first. Keep in mind there may be many areas of damage, so you may have locks scattered all over the hood..
Last edited: Mar 19, 2020

This is a good read on oil canning, but this damage is from welding, so opposite cause and opposite repair of what you need. But still a good educational read.


The oil can thoughts I have posted on that thread I'll repost here that someone may more readily find in the future:

Before I suggest to someone how to fix an oil can, it is best to find out what kind of oil can you are dealing with, first and foremost.
I consider there are two kinds, a tight oil can and a loose oil can, each will require a different method of repair.

This is almost exclusively caused by body damage, whether a dent, glancing crease, or media blast damage, and is especially noted by displaced metal that will oil can when considerable pressure is applied, and may or may not forcibly spring back. When the body damage occurs, it stretches the panel throughout the dent or crease. A typical dent, whether straight in or a glancing blow, will have direct and indirect damage. The direct damage goes inward, stretching the panel as it goes. The indirect damage, is a much lesser amount of spring-back, compounded by the internal stretch pushing outward circumferentially, and you will see an outward bulge around the perimeter of the dent/damage. Although the initial inclination may be to shrink this outward bulge, for the most part this adjacent area is relatively damage free, it is mainly being spread outward by the stretch forcing outward.

Shrinking the center damage will start the process of relieving the stresses pushing outward, relaxing some of the bulge surrounding the dent.
After a bit of shrinking, using the shot bag against the outside of the crease/dent and some light taps with a flat body hammer or slapper from the inside will help to start manipulating the crease/dent back into it's original place. I would add that too much shrinking all at once may give you the loose oil can, so profile templates are highly recommended as they work well to let you see how the panel is reacting so you don't go too far too quick.

Where some tight oil cans from dents may be challenging to determine where to start your shrinking (if it doesn't have an obvious sharp crease to show where to work from) the following process will normally find the area that needs shrinking.... Cycle the oil can in and out a couple times in order to find the outer perimeter. If it helps to mark it with some painters tape, a sharpie, so be it, use whatever works. Now using your thumb from one hand apply slight pressure on a point on this perimeter. Use the other hand to cycle the oil can again, using the same pressure as before. Keep moving your pressure point around the perimeter and cycle the oil can for each spot until you get to a point on the perimeter where the pressure will keep the oil can from cycling, it locks it from moving. This should identify your sweet spot that needs shrinking, and be aware that there may be more than one sweet spot needing attention.

This is typically caused by welding, over-eager torch shrinking, or shrinking something when you should have stretched, (or fatigue over the many years that has caused a larger panel/hood to settle). Any panel will shrink from heat, causing the crown to draw in from the surrounding area. This is especially noted by a loose, easily flopped back and forth oil can. This is fixed by stretching, typically in the area of the weld and HAZ.

I think in your case I would use the method described in "tight oil can, part 2" above. Find all of your oil cans, cycle them all to find any with the "locks", marking any that you find. Go over the entire hood with this process before doing any shrinking in any one area. You may likely find some oil cans with locks, and some without. I would address those with locks first, and the ones without are likely caused by outside forces, to some extent pushing from an adjacent area.

Jim, here is another read that examines shrinking methods, and is in part where some of my conclusions on the oil can removal process originated. This is totally right field as it is a sandblast media "damage" test that we did in the shop.. But the shrinking methods may help to highlight another method you may not have considered otherwise..

Will a propane torch heat enough for this?

If you are talking about the handheld kind, no. It doesn't get hot enough and the big soft flame doesn't concentrate the heat in a small area. So what ends up happening is you overheat a large area trying to heat the high. You can do some very limited shrinking with it but it's night and day compared to a oxy-acertlene outfit.

Ok thanks to Robert and Chris I am starting to understand this. I used my stud welder to heat the area. What I learned how much of an art this really is. It is not just smack away like it sure looks like the video is doing. He just has years of smacking and know exactly what he is doing! I started to see how shrinking with heat is really the LAST answer. You have to push and pop and read what the panel is telling to do to it. Sometimes just forming the crown more or using the spoon to knock a low spot up will release the wave and make it not oil pan...

I worked it for about 2 hours (1.5 was just learning and experimenting) but I got it way better. No oil canning and I ended up getting rid of probably 60% or more of the filler..... I am far from an expert yet but I know am getting the feel so the next car..... wait no more restorations... no more restorations... I will spend more time with the dolly and spoon before the filler comes out.

where you see metal use to have two layers of filler over it. 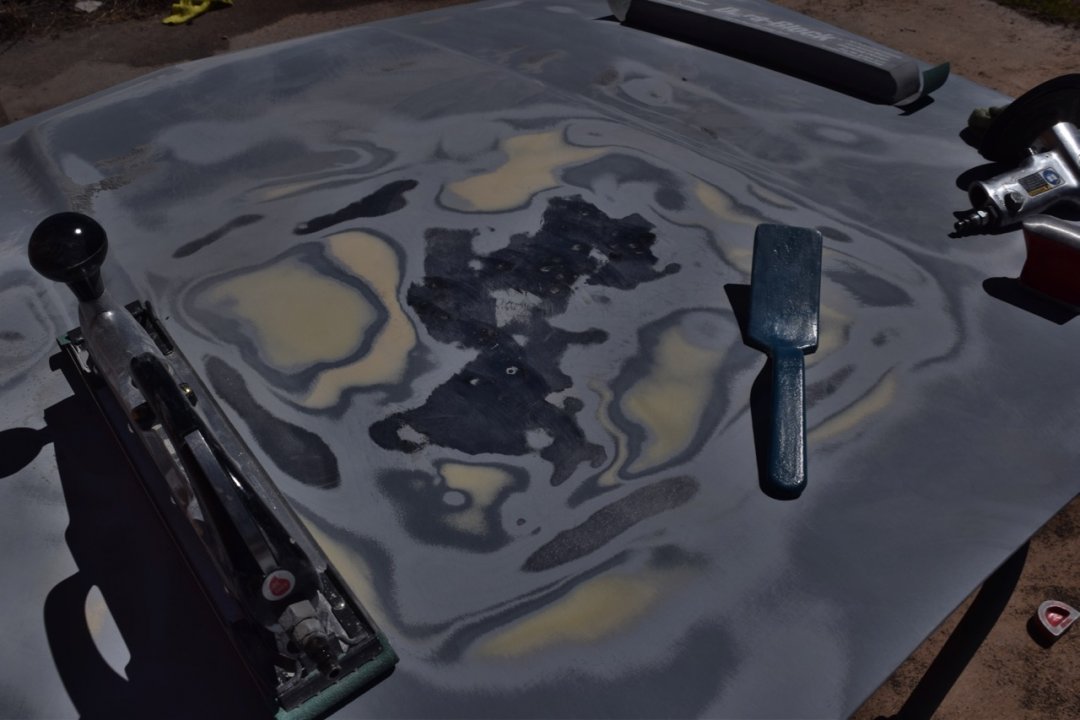 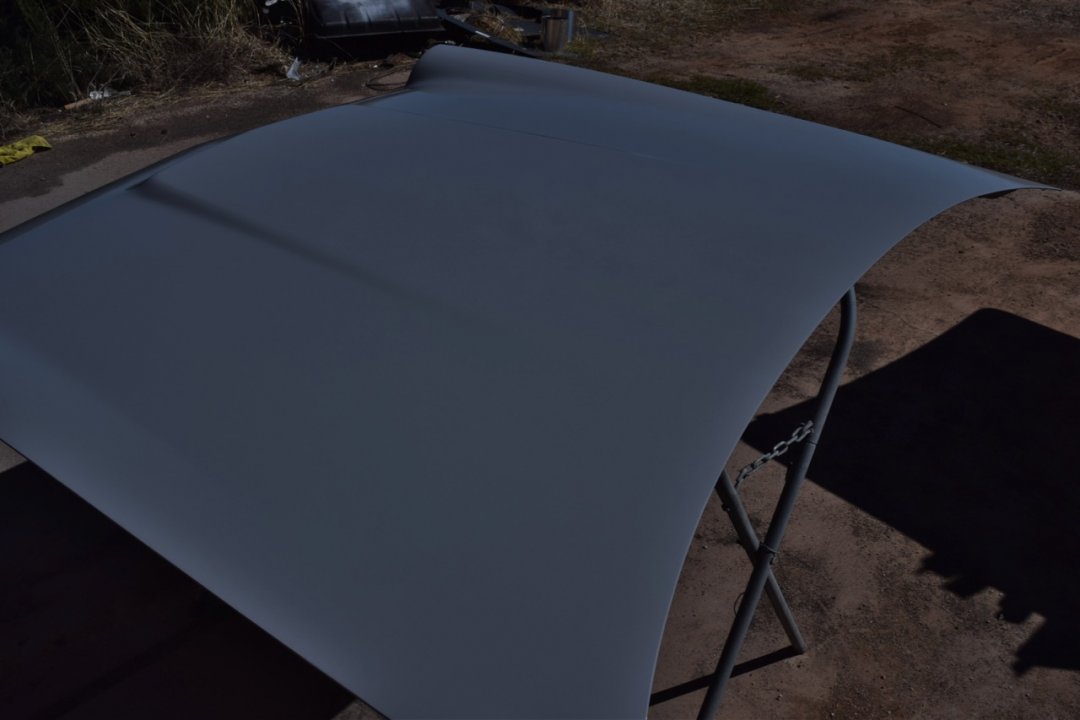 Next car? You already got one in mind don't you? Admit it, you're addicted.

'68 Coronet R/T said:
Next car? You already got one in mind don't you? Admit it, you're addicted.
Click to expand...

are the two that I just need to bring cash to take home.

I confess that I am always browsing craigslist for a "next" project.
So many to choose from but some just way over priced for the condition they are in.

Jim, Oil canning repairs are one of the hardest things to "get" much less learn over pictures on a forum. Well done for jumping in and showing how it's done!

MP&C said:
Jim, Oil canning repairs are one of the hardest things to "get" much less learn over pictures on a forum. Well done for jumping in and showing how it's done!
Click to expand...

I am one that always struggled with oil can dents, but after the last 7-8 jobs, I no longer fear them. Three of the jobs were warped from blasting. Those probably taught me the most, with much help from members on here. The rest were mostly roof and hood damage from people sitting on them watching fireworks or a drive in movie
You must log in or register to reply here.
Share:
Facebook Twitter Reddit Pinterest Tumblr WhatsApp Email Link
Top