Here is a car that my wife and I bought last summer. This era of car interests me. It was a 30 footer that is snowballing into who knows what. I pulled the engine for new rings/gaskets and a wire harness. It so far has gotten a lot more. I'm working on it evenings and weekends so it won't be a really fast job and I'm not sure where I'll stop. These things can be expensive and not worth all that much so I will balance the cost and how much I'm willing to put into it. I've accepted the labor won't be added into it as I wanted to preserve what the car is. It was purchased new in Detroit and has been in the area every since. I maintain a car very similar to this for a client and really enjoy driving these things. They might not handle very good but modern cars can't hold a candle to the ride of these things. 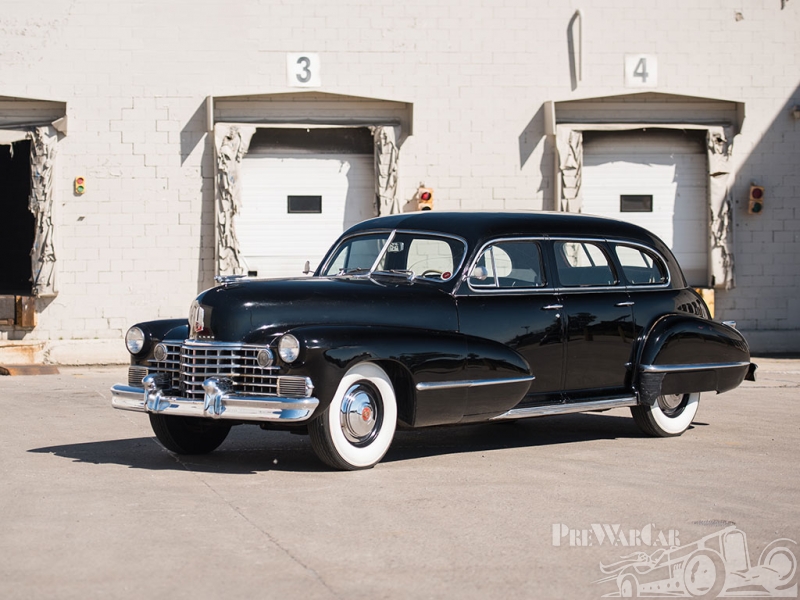 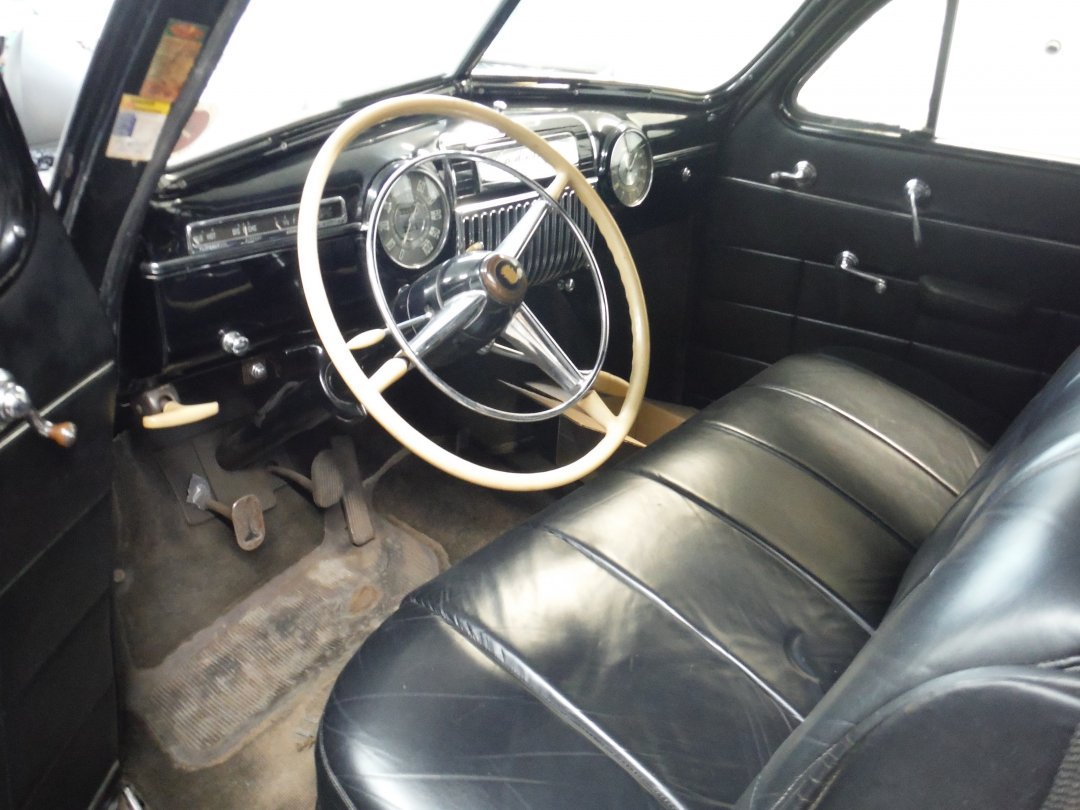 That's remarkable for a Michigan car Brad. It must have lived in a heated garage with a Chauffeur that had no other duties. Nice comfy seat too.
B

Looks are deceiving. A lot of scale on the bottom of the body. Frame is clean with just a light rust scale.

I wanted some free labor before my dad went South for the winter. We pulled the front clip from the car to remove the engine/trans. A lot of the sheet metal bolts needed heat or would break off.
This car wasn't to be painted and yes it's a little rough on the laquer paint, the plan was to have fun with the car with rebuilt drivetrain. Since the wife thinks I'm nuts with a side of ocd it's getting a little deeper. 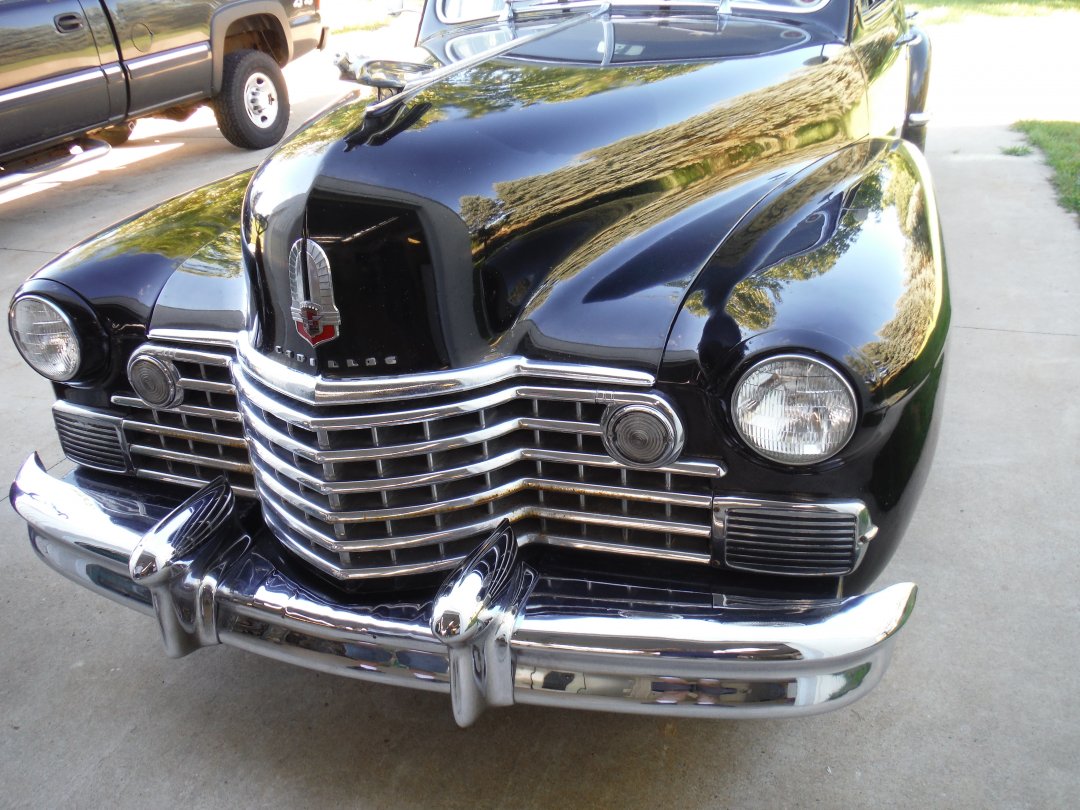 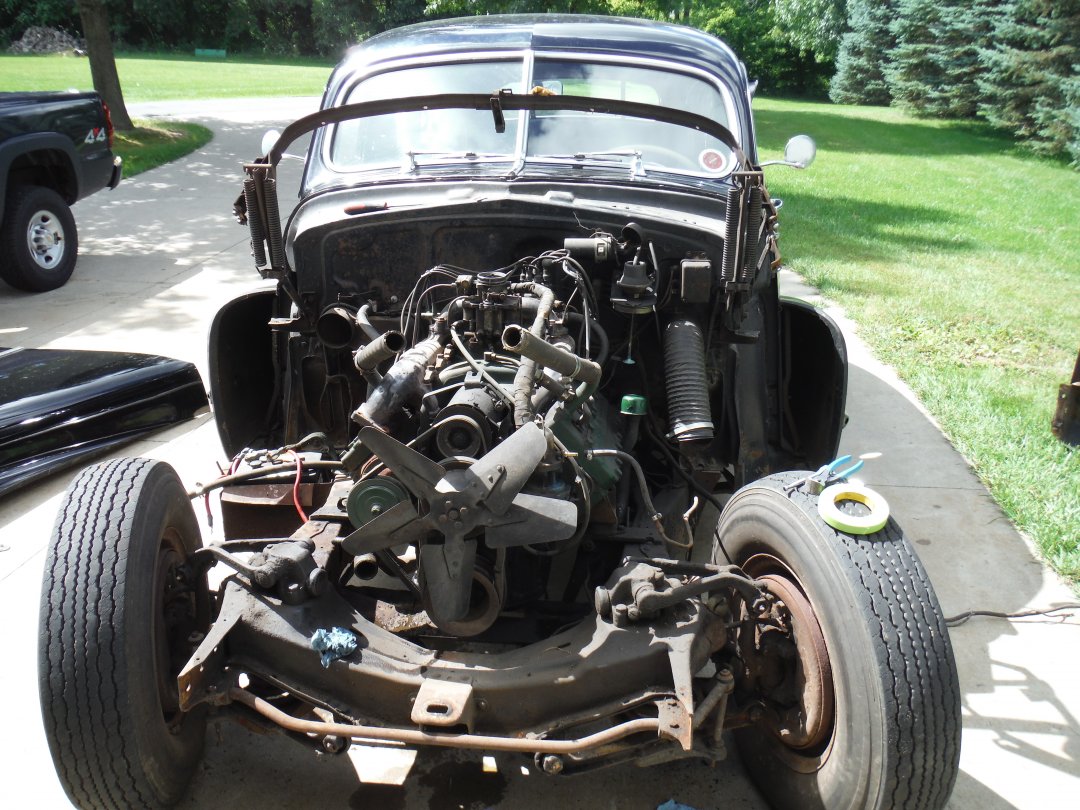 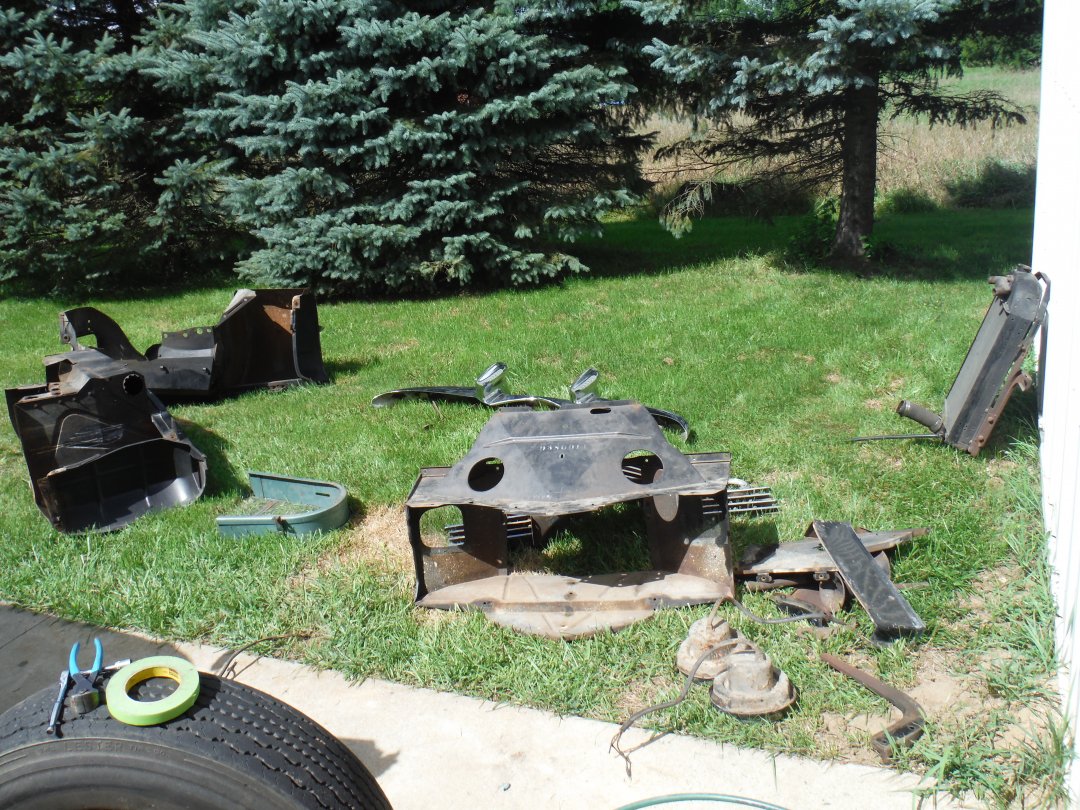 Brad, beautiful car but that's a pretty good size rabbit hole. On the bright side, the back seat space should be real comfortable when your wife suggests you move out of the house and live with your new love.
B

Good one Bob. I don't envision me living in it yet. She grew up watching her grandfather restore cars like this. She is the catalyst why we have the car. I was just supposed to leave it alone.

Now if it was a muscle car or vette I would've moved into it the moment it hit the driveway.

It's hard to resist the urge to make just one more thing right before calling it good.
E

Beautiful car and what a era. And don't forget to go over the brakes.
B

Pulled the engine/trans. I didn't take very good pictures of this as I hadn't planned on sharing this. I dissasmbled the engine and took it to the machine shop to check tolerancese. My rings/gaskets was blown when I noticed more ridge in the cylinders than I liked. The main/rod bearings were starting to flake the babbit off the inserts. Time for a complete engine.
Three cracks in the block needed one stitch pin each and a new sleeved in each of those cylinders. This doesn't surprise me. It's a 42k car but this stuff didn't last like to todays engines. I think oil had a lot to do with it. And no oil filter, it was optional this year and didn't have one. Of course oil filters then didn't filter the oil like a full pressure system of today where all of the oil coming through the oil pump is filtered. Once rebuilt and the use of correct oils then they are darn near bullet proof. The engine is a 346 cubic inch and the block alone weighs twice what a small block chevy does. This makes an extremely stable block and these engines are famous for how smooth they are.

I had to get the block/heads acid dipped to remove the rust scale built up in the block. Common on these older cars. When I got the block back I washed the outside with baking soda water/rinsed and then a couple times with waterborne. I then masked the block and sprayed 2 light coats of epoxy as to seal the exterior from oil when I reassemble it.

My plan is to share a little each morning as the progress.

Its been said that engine wear is done before it reaches operating temperature, and I bet that car has had a lot of short trips.

I've never seen the inside of one of those engines, as much detail as you would wish to share would really be fascinating!
B

I wish I would've taken more pictures but I have some. I'm waiting for a couple parts to finish it up and I will get some better photos when I do that.

An interesting feature on the engine is hydraulic lifters. Few auto makers had hydraulic lifters back then. I know Packard did also but these were two inovators that constantly one up'd the other. There are 4 lifter bodies that hold a set of 4 lifters to the block. They are pressurized through the brass fittings and steel lines. You can kinda see it in the previous sludgy motor. This made the motor quiter and less maintenance but we have two straight 8 cars with solid lifters and they are pretty quite and don't take a lot of maintenance.

The crankshaft has two heavy counterbalancers on it also. They are around 2" thick by 2" wide by 6" long. They are bolted to the crankshaft. One for the front 4 cylinders and one for the rear 4 cylinders. Crankshaft is extremely heavy. It has a 3.5" by 4.5" bore and stroke. The longer stroke makes more torque for moving these land yachts. Horsepower is 150 at 3400 RPM's with 7.25:1 compression ratio. So they are a relatively low RPM motor. They rated the HP as brake HP so I'm not sure if that means at the wheels or not. These were a good enough motor to cause Cadillac to drop the v-16 engine from the lineup in 1940. 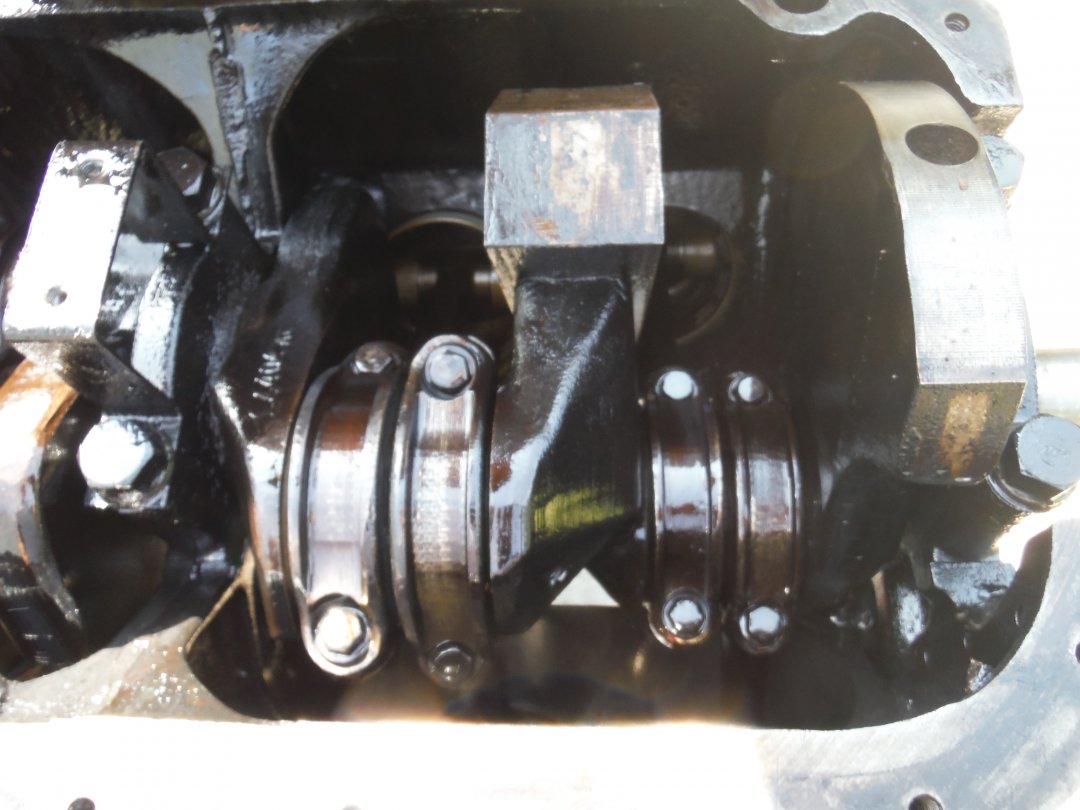 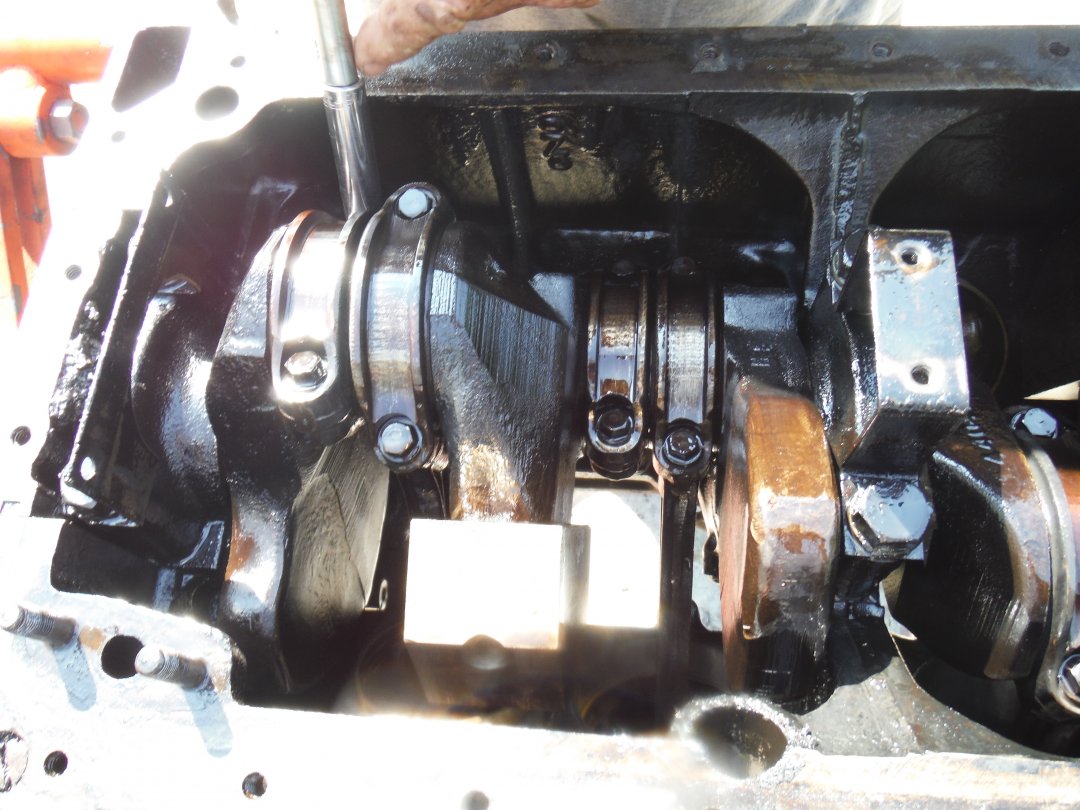 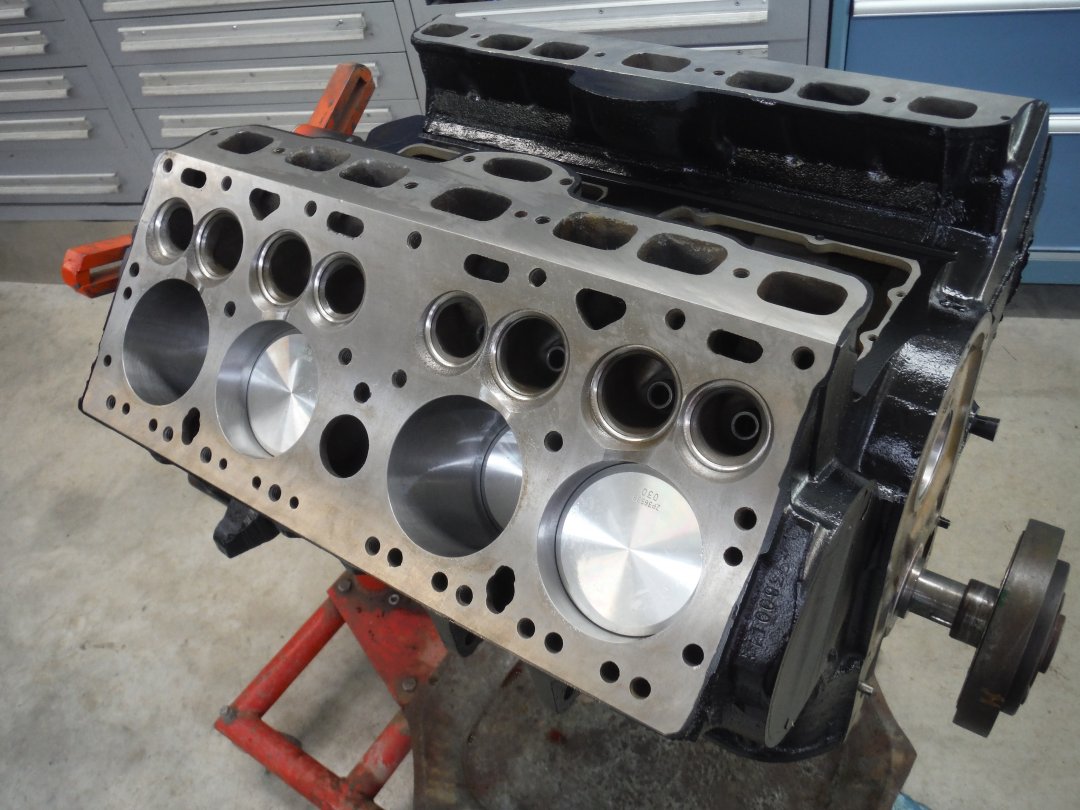 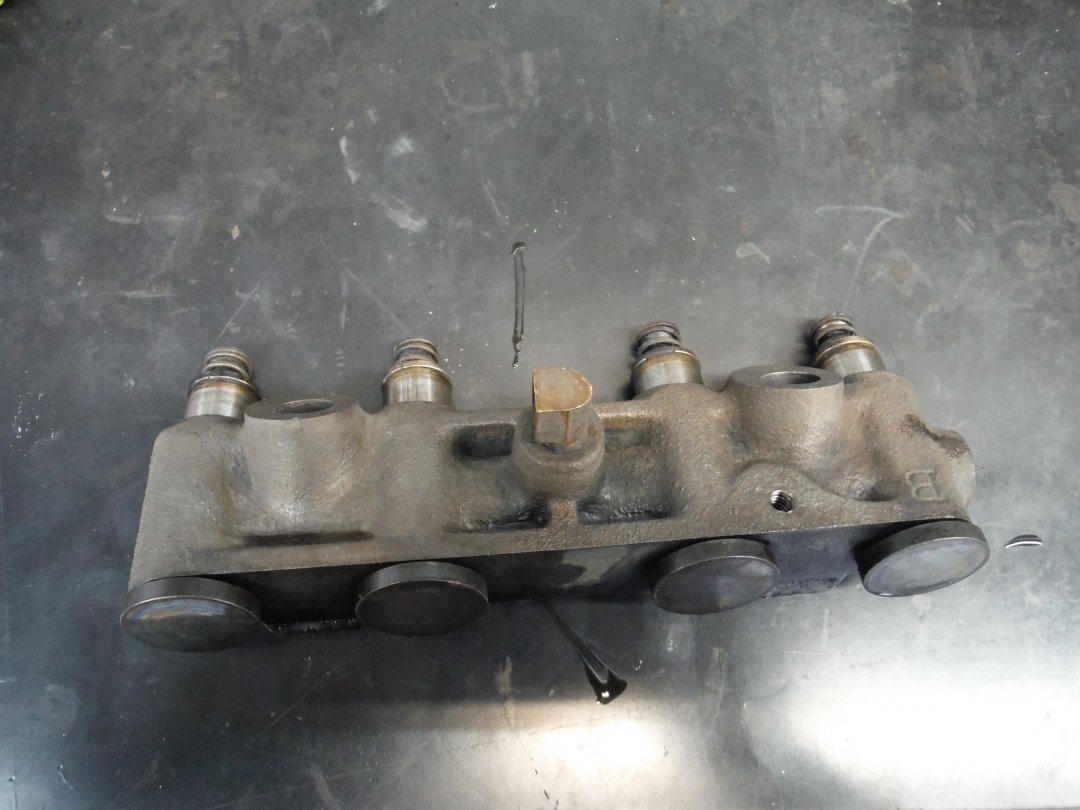 Mushroom tappets, cool! Thanks for the pics, love the look of that big ol' flathead!
B

Engine is assembled. Except for the lifter assemblies. Waiting for oil pump parts. I stuck it together, taped it off, scotchbright the epoxy and sprayed 2 coats chroma premeir SS. The engine sheet metal was blasted and refinished also. Helpful hint. Take all the engine sheet metal to the engine builder to be hot tanked. Removes all the oils without me doing the labor. Works great.

I forgot to mention yesterday that these engines don't have poured babbit bearings. Almost everything during this time had poured babbit in the rods and mains. These are inserts like any modern engine. Nice feature if something happens to a rod. Still places around that pour babbit but it usually takes 8-10 weeks.

Back then you really paid for more car when you bought a Buick/Caddy/Packard. Now a days a caddy is a chevy with sound deadener and jazz stuck on the side. Maybe a little harsh but I'm not interested in new stuff. These cars can run down the highway where a Chevy or Ford were mostly 45-55 mph cars.

My dad dove into the powerwashing the grease from the frame/firewall. The front springs had twist style coil helpers so it was time for a new coil springs. 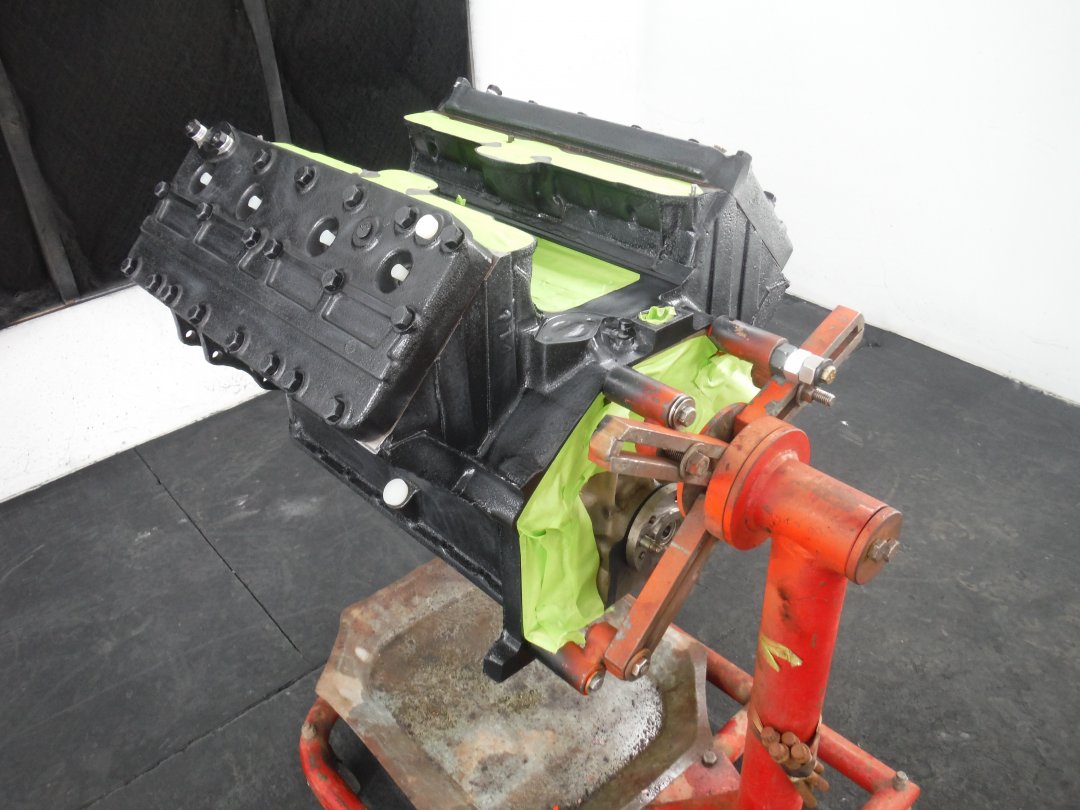 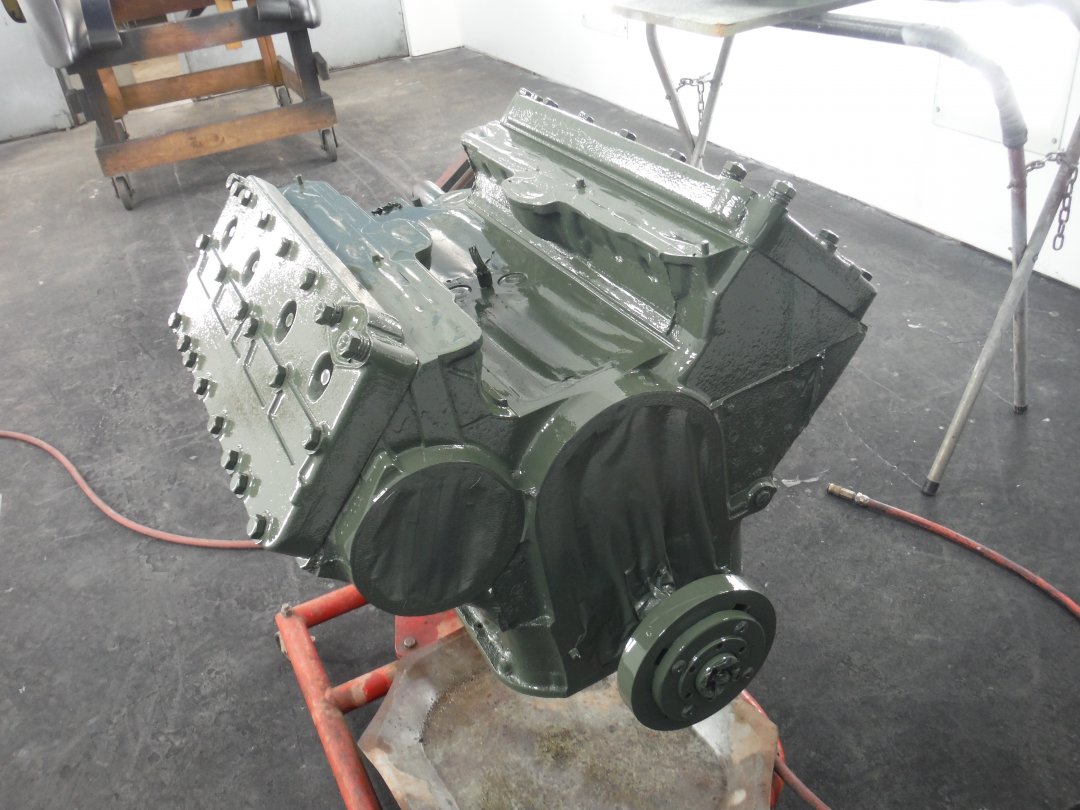 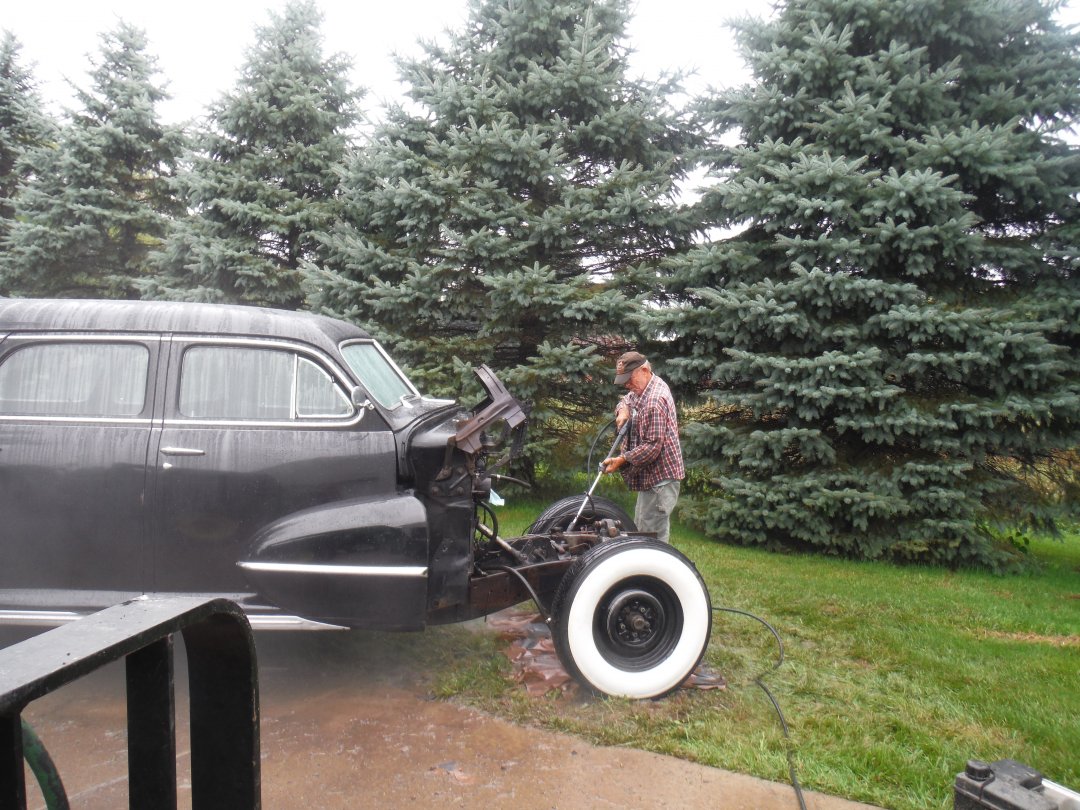 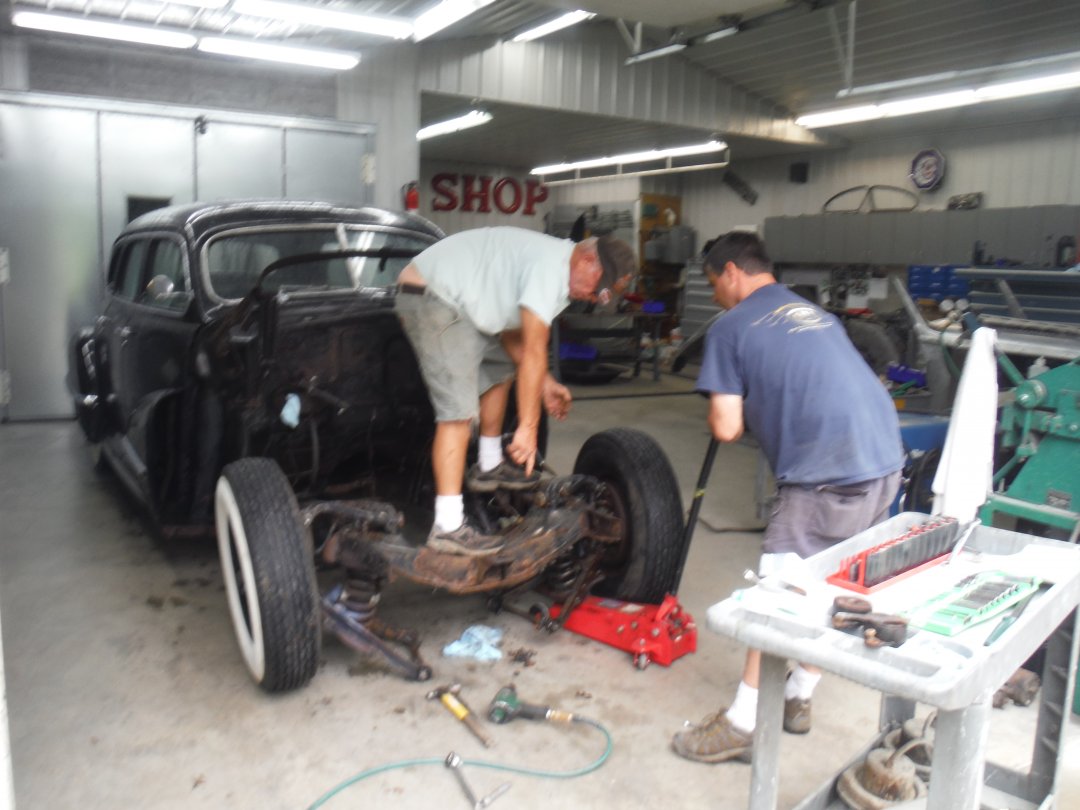 Great project.
Nice shop you have there. Looks like plenty of room.

Staff member
Wow now this is my kind of a project and love flatheads but did not know these used mushroom lifters, I for some reason thought only the Y-block used them, learn something everyday!

i did a 41 about 5 years ago. it was a 60S. a little different than what you have there but similar. the restoration process for these things is crazy and super expensive. some of them are worth nothing and other are fairly big money. they were really custom built for the customer back then so getting one that is worth big bucks really depends on how rare the options were and if you have the documents showing someone famous owned the car. the guy i did the car for had over 100 old caddys from the 40's. some were personal limos for hershey co, the ambassador to japan and tons of others. the one i did had all kinds of fine woodwork on the interior which i see isnt in yours. alot of the body had oak in it for structure as well. there are some pretty comlpex oak beams on the undersides which i have patterns for. the car i did had alot more chrome than yours. the owner had it all redone. ran him $40k just for the chrome. after doing the car i had much more appreciation for the old caddys and the detail they put into them especially the interiors. they were more comfortable than the couch in your livingroom.
B

This car is a 67 Series. It's one of the very few early Cadillacs that used a Fisher Body instead of Fleetwood. The body is actually a 41' Buick Limited with Cadillac front clip and rear fenders. The body is larger than the 75 Series which is the flagship. These cars had a larger interior to use the pull out jump seats easier. I'll get some pictures of the interior. It a has a bunch of wood graining in the back. This car was bought new by S.S. Kresge (Kmart) and his wife kept it until 1977. We are the 4th owners.

We stripped the front suspension for a complete rebuild with new kingpins and such. I blasted the a-arms and everything else related to the front suspsension. 2 coats epoxy + filler on the pitted backing plates+ a couple more coats of epoxy. I didn't get crazy during this procedure. Just wanted to smooth everything out a little bit in regards to the pitting. I sent out the front shock absorbers to be rebuilt as they were so low on fluid they didn't really work anymore. The remnants of the fluid was caked with crap all over the frame that we scraped before powerwashing. 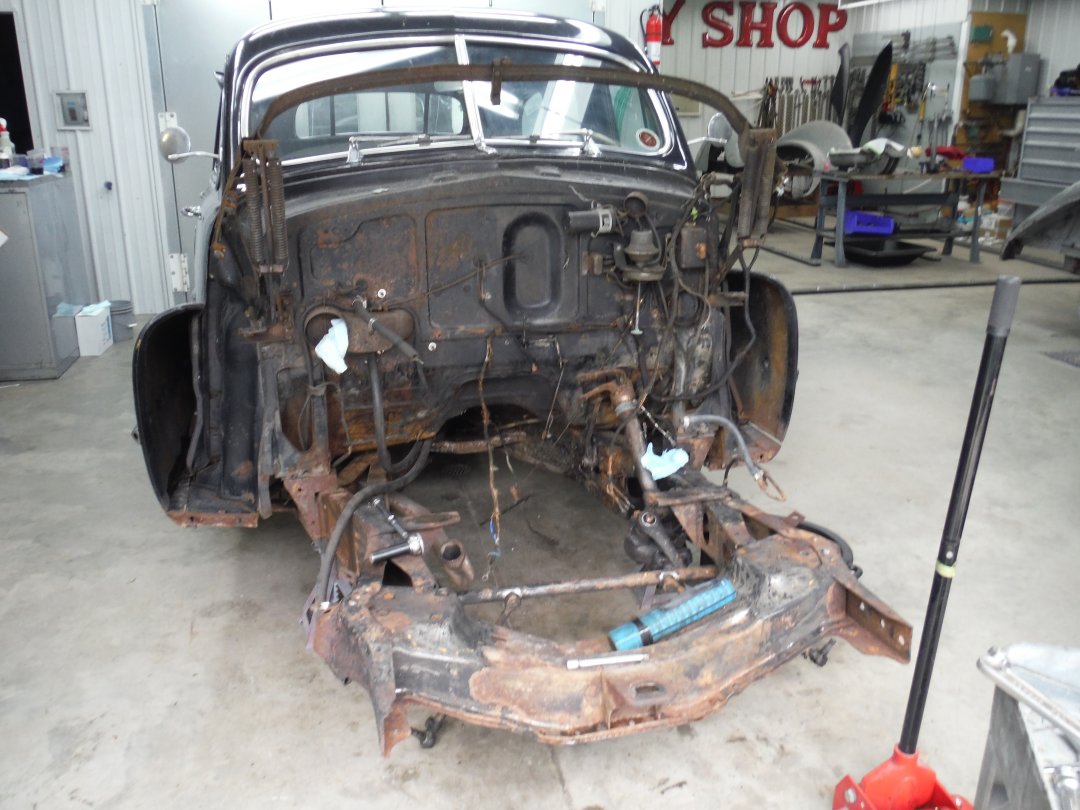 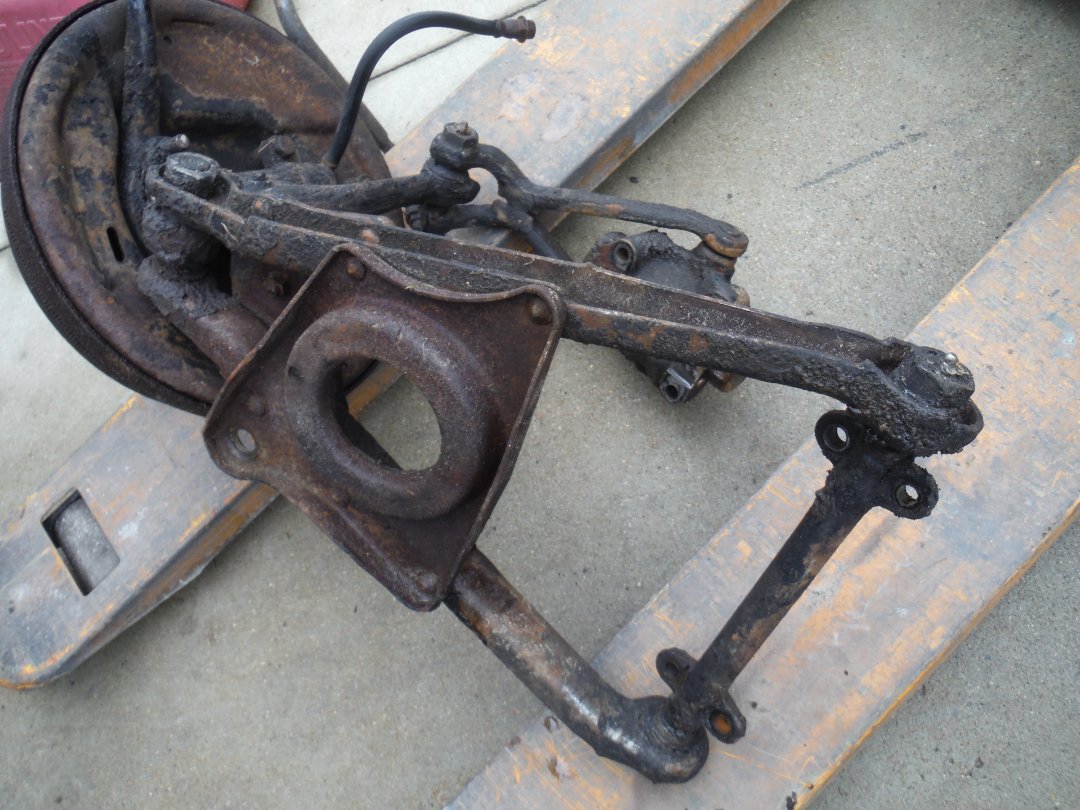 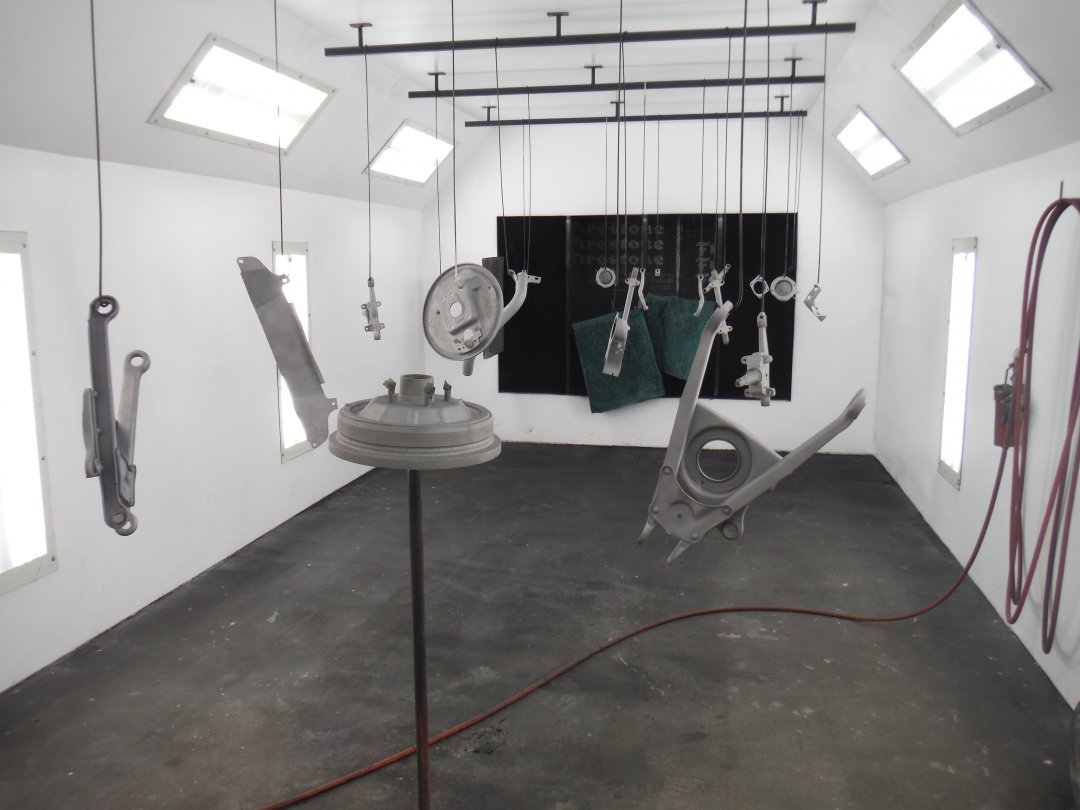 While I had stuff cleaned up for a new engine I couldn't just leave the ugliness. The ugly question or where to stop arrises so I dip my toe in a little deeper. Pulled the rear fenders to blast the chassis/underside of body. Typical GM rot spot on this era of car and fenderweldt did a good job of hiding the damage.

I wrapped the body in collision wrap and blasted the entire frame/underside of body. I didn't blast the rear axle or springs at this time. They will be pulled and done individually later. Blasting was a big task on this thing. Took most of a day of crawling around on the ground.